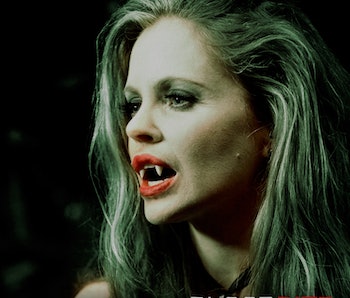 Even if you didn’t watch True Blood, you probably heard about its more sensational scenes, like the time a character burst into flames while shrieking and reading naked on a glacier, as one does. Or that time another character said “I am a gay vampire American” with a straight face. Absurd, pulpy, and salacious, at its peak, it made The Rocky Horror Picture Show look like Downton Abbey. But surprisingly, it holds valuable lessons for current shows like Game of Thrones, Outlander, The Leftovers, and the upcoming American Gods adaptation — lessons that extend far beyond how to construct the perfect blood-geyser or supernatural sex scene.

Every show that draws inspiration from a book — whether it’s a single novel like The Leftovers and American Gods, a series like True Blood, Game of Thrones, and Outlander, or assorted works like Penny Dreadful — eventually comes to a crossroads where it must decide how to diverge from the source material.

For The Leftovers, this point came in Season 2, when the show found itself moving beyond the book’s territory. Expanding the world in the second season was a smashing success, resulting in one of the most beautiful stretches of episodes in recent television history, even if the Emmys ignored it. It embodied the positive side of expanding upon the material: The new setting — and a whole roster of new characters — still fit within the universe and themes of the original novel, but it allowed the series room to pivot in a more interesting direction — one that brought us “International Assassin”, an episode that is such a masterpiece, it singlehandedly redeems Damon Lindelof from Lost. See it to believe it.

Though tonally different, True Blood paved the way for this approach first, with its Fellowship of the Sun storyline. There were no anti-vampire churches in the original novels, but it absolutely fit the world. It was one of the show’s most delightful sub-plots because it perfectly encapsulated its satirical, slyly self-aware tone.

Accordingly, the show went off the rails in its later seasons when it lost track of this tone. No True Blood viewers were tuning in for a sedate domestic drama, but that was the baffling note it chose to close on. Similarly, Outlander stumbled in its second season when it forgot why its audience was tuning in and sidelined its subversive and unique approach to sex. It instead focused on overly convoluted and snail-paced political machinations other shows do much better.

All book adaptations, by necessity, need to alternately shave and embellish their source material, but True Blood is the loudest and splashiest example of how they stumble when they lose sight of why the audience is watching in the first place. You can’t spoon-feed the audience everything you think they want, of course — that was the problem in Game of Thrones Season 6, which focused so much on payoff that it forgot pesky details like having Arya’s plot make sense or having Jon’s resurrection feel meaningful. But you need to have an understanding of why they chose to engage with your show.

That brings us to American Gods. Like The Leftovers, it draws from a single book, albeit a high-concept one with infinite sub-plots to dive into. It’s a promising sign that the show is already heading in different directions, such as casting Jesus, who only appears in the post-script of the novel, or changing Mad Sweeney’s aesthetic from trucker-trash to hipster-trash. This is akin to True Blood’s Fellowship of the Sun storyline or when The Leftovers moved to Texas. These embellishments simultaneously expand upon the pre-established universe while demonstrating a keen understanding of it. Sticking closely to the source material isn’t always necessary but knowledge of that material is. If American Gods wants to avoid Outlander and late-season True Blood’s failures, it needs to stick to the tone and themes of its source material.

We live in a unique time when, in some cases, we can actually say “the show is better than the book.” But the key to reaching that place is neither to copy the text verbatim nor to entirely discard it. Instead, it’s to do the one thing that transcends narrative forms: Give it a close reading.