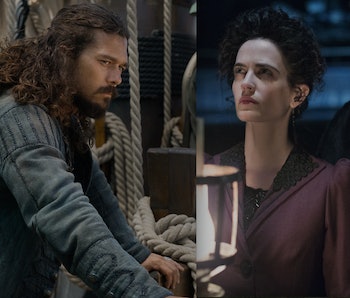 It might sound strange to call Penny Dreadful and Black Sails the best literary shows. After all, neither is directly adapted from a novel. Penny Dreadful borrows characters and plot lines from several gothic classics — Dracula, The Picture of Dorian Gray, Frankenstein and even the Marquis de Sade’s work — while Black Sails uses characters from Treasure Island 20 years before the tale, mingling with historical figures. Neither show features scene-to-scene translations from the book to the screen, and that’s exactly what enables them to be the best. They capture the spirit of their texts and are cloaked in literary sensibility without suffering from the inevitable “but that wasn’t in the book!” protestations from viewers.

Consider the other two most popular television adaptations of the moment: Game of Thrones and Outlander. Each season directly corresponds to a novel (save for Game of Thrones Season 6), and each has subsequently suffered from comparisons to its source material. While the first few seasons of Game of Thrones were stellar, it’s no coincidence that Season 5 was one of GoT’s least eventful. A Feast For Crows and A Dance With Dragons — George R.R. Martin’s original plan for one book turned into two — are the most meandering volumes in the series.

Of course Arya spends two whole seasons sweeping floors and hitting things with sticks: Jaqen H’ghar’s cryptic mutterings were, in many ways, a shrug from the show’s creators. There wasn’t much to go off in the books, and unwilling to invent their own plot, they stuck her in a cycle of repetition.

It’s also no coincidence that the first half of Outlander Season 2 has limped tediously along; Dragonfly in Amber is a messy, oddly structured novel. Even the most hardcore fan will never say, “my favorite part of the story is when they’re in France far too long and nothing relevant happens!” The writers would have been bolder to skip France or limit it to two to three episodes — but they clearly felt like they had to check the France box because it’s in the books, even if its universally acknowledged as weak.

Since Penny Dreadful and Black Sails pick and chose which book elements to nod to, they’re never in danger of such comparisons. When Penny Dreadful shows us Dorian Gray’s portrait in Season 2, it’s an unexpected delight. Because the show isn’t a direct screen adaptation of The Picture of Dorian Gray, there was never an expectation that we had to see it onscreen. When Victor Frankenstein built the Bride, because she’s a rather under-explored character in the canon, it allowed the show to have fresh and a gloriously feminist take that stood on its own. The writers never feel like they’re simply making do with what they’ve got; both shows always feel innovative even when they’re cloaked in old-fashioned aesthetics and classic storytelling sensibilities.

Similarly, when Black Sails has Billy Bones send a black spot at the end of Season 3, it’s a sly wink to Treasure Island readers who know that he will eventually be on the receiving end of one. But since it’s not a direct adaptation, we had no expectation of seeing a black spot onscreen. When we do, it feels like a treat rather than a check in the box on a plot point.

Plot aside, direct book adaptations also provoke inevitable comments about actors not looking how the characters look in your head, or the show skimping on their inner life. A Song of Ice and Fire book fans were peeved when Game of Thrones Season 6 had Jaime proclaim his love for Cersei when they’re estranged in the books. It felt like a step backward on his character development. Similarly, Outlander book fans are miffed Season 2 hasn’t afforded as much time to Jamie and Claire’s relationship dynamic.

But in Black Sails, John Silver starts the series a wildly different man than the character we know — a bad cook with all his limbs intact who has no real desire for a life of piracy. Rather than being frustrating, it made us curious how he’d end up a notorious pirate with a peg leg and the nickname “Long John Silver.” We’re not disappointed that he was initially different than what we pictured, because it has a hell of a payoff. The same applies to the Black Sails version of Billy Bones. He looks more like a tennis instructor than the craggy alcoholic we know in Treasure Island — but because the show takes place twenty-odd years before he turns into that man, it negates the, “but that’s not what he’s supposed to be like!” protests.

If you’re upset Daario Naharis never had blue hair on Game of Thrones, you’re out of luck. But if you think Billy Bones looks too clean-cut to be the Billy Bones, instead of feeling like the show short-changed the character, you’re just more intrigued to find out how he’ll evolve.

And it isn’t just plot and characters that make Black Sails and Penny Dreadful rise above. Ironically, it’s their very freedom from specific texts that allows them to have a level of intertextuality that’s unmatched on TV. Characters on both regularly quote other works, references to storytelling abound, tropes are nodded to and subverted. The writing feels like a hybrid between television and book writing. As a result, both shows get the best of both worlds, with novel-style character development and television style spectacles.

This is not to criticize Game of Thrones and Outlander — both do an admirable job with doorstopper books and twist their source material in intriging new shapes. But like most adaptations, both occasionally suffer from Harry Potter movie syndrome: a feeling that some scenes are rushed and trying to cram too much in, while others give too much room to moments that would be better left on the cutting room floor, if only the writers didn’t feel pressured to include them.

Black Sails and Penny Dreadful might not be directly adapted from books, but they allow a literary flavor to soak into their very being. In the future, more show adaptations should look to their model for how to nail a novel onscreen without getting lost in translation.