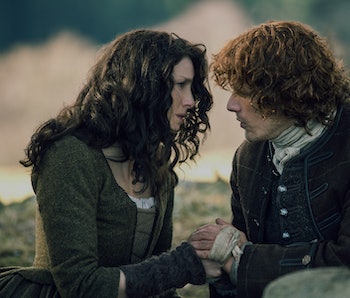 Most prestige dramas have a pattern to how they depict sex scenes: They occur one to three times a season and the camera focuses on the woman’s breasts and expressions of ecstasy. We might get an obligatory shot of the man, but it quickly cuts back to the woman and their shadows dancing on the wall either romantically or ominously, depending on the tone of the scene. You have seen this in too many shows to name: True Detective, Game of Thrones, Californication, Entourage, even in The Affair, aside from its occasional random dong shot. But when Outlander hit the scene last year, it shook up the conversation around sex on TV, how it’s filmed, and who it’s for.

It featured a heroine who was sexually forward in a way that wasn’t played for laughs or a “look how crazy she is!” character beat, and its sex scenes objectified the man just as much as the woman — if not even more. Both the camera and the characters emphasized the female gaze in “The Wedding,” which is rare to the point of nonexistent on TV.

The focus on Jamie more than Claire hardly alienates straight male viewers; he was enjoying being looked at while Claire enjoyed appraising him. The whole scene is charged with their mutual appreciation. Unlike that True Detective scene featuring a fully clothed Woody Harrelson and a fully naked Alexandra Daddario, it is not erotically catering to only one kind of viewer.

This shouldn’t have been revolutionary — everyone involved in the show says they didn’t set out to make it “feminist” or even “feminist Game of Thrones”, as some call it. But thanks to prestige TV’s usual depictions of sex, it was. It put Outlander on the map for good reason: It became known as a show that handles sex in a unique and realistic way that both captures and respects female desire.

Outlander rightly earned its critical buzz for this — which is why it’s baffling that Season 2 threw it out the window. Other than one or two quick scenes that were filmed in a way that’s fairly standard, Season 2 was both celibate and free from female directors — while the buzzed-about “The Wedding” was both written and directed by a woman. This severely impacted the show. Instead of being a subversive drama that handles sex in an interesting way, Outlander in Season 2 was a run-of-the-mill period piece that didn’t handle scheming and plotting as well as Black Sails or battles as well as Game of Thrones. It came off a pale, dull, less coherent imitation of both.

And that’s a damn shame, because it has the potential to be a powerful show. Sex is Outlander’s strength. Plot is its weakness. Instead of playing to its strengths, Season 2 demonstrated that it doesn’t even know them. The Season 2 episodes set in France and the Scotland episode “Vengeance Is Mine” were particularly egregious examples of the show’s tendency to rely on coincidence and improbable character meetings in lieu of smart plotting.

Look, Black Jack is suddenly in France like a sociopath Where’s Waldo! Now he’s back in Scotland because it’s convenient to the story! Now he must marry a woman Claire met in France! And look, that tongue-less guy Hugh is back too! He’s running into Claire and Jamie and message-bearing horseback riders on conveniently empty roads! Maybe he’s borrowing Varys’s teleporter to get around everywhere so quickly.

Outlander’s narrative has always been silly, down to its basic premise: A married World War II nurse somehow time-travels to 18th century Scotland and falls in love with a Highlander, then schemes with him to change the future. It’s never made sense why Black Jack keeps popping up everywhere like a sadistic Where’s Waldo, or why Jamie and Claire keep making terrible plans that don’t work, rescuing each other from their results, then abandoning them for more terrible plans in a different location. We forgave the show for its sillier aspects in Season 1 because it was so well done, and its strengths — like its approach to sex — were indeed smart.

But if Season 3 has any hope of recovering the goodwill that Season 2 all but lost, it must remember what the show is good at. Otherwise, the show better hope it stumbles upon its own Craigh na Dun and travels back to a time when it was still worth watching.

More like this
Culture
5.8.2022 11:30 AM
You need to watch the best time-travel epic ever on Netflix ASAP
By Gabrielle Bondi
Entertainment
5.18.2022 7:00 AM
Stranger Things cast unpack a "quite metaphorical" Season 4
By Eric Francisco
Entertainment
5.5.2022 6:23 PM
Loki Season 2 departure casts doubt on the MCU show’s future
By Dais Johnston
Related Tags
Share: