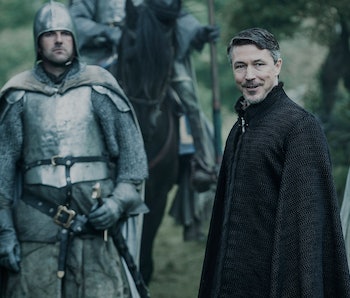 The sixth season of Game of Thrones had some of the most exciting scenes of the series — that Wildfire sequence, Ramsay’s Death By Hounds, the confirmation about Jon’s real parents that’s been years in the making — but it also had some head-scratching moments. Since Season 7 has been delayed for vague reasons, it’s a good time to revisit the weird and nonsensical moments of Season 6.

The Battle of the Bastards was a visceral, dirty, engaging battle sequence. It thrust the viewer into the chaos and let us feel the bloodsoaked panic. That being said, when the knights of The Vale suddenly rode up to the rescue at the last minute, it was a WTF moment because Game of Thrones doesn’t usually do last-minute Scooby-Doo style rescues — that’s more Outlander’s territory. But it also raised far too many questions to accept as is: Why did the knights ride up at that exact moment — were they waiting until things looked hopeless? Or was it just convenient timing? Why did Sansa ride in alongside Littlefinger — was their arrival not a surprise? Or did they just meet on the road?

4. Daenerys waiting and letting her own people die

At the beginning of “The Battle of the Bastards,” we got an unexpected battle in Meereen. Daenerys came back to find the city in shambles. Instead of making it right immediately, she waited and dicked around with Tyrion for a while while her own subjects were being murdered in the streets. After a few hours, she then swooped in to rain fire and blood and end it. Why not end it sooner? WTF, Dany?

Arya’s human meat pies were a gloriously sweet revenge on the despicable Walder Frey. They also raised many, many questions. Where did Arya — who has neither time nor inclination for domestic pursuits like cooking — learn how to make suspiciously Martha Stewart looking Sweeny Todd pies? Did she stop by to visit her old friend Hot Pie for baking tips? Did she use a cook book? And barring that, grounding the people up would take a lot of time and equipment. How long was she toiling away at it? How did she do it? How did she clear out the kitchens to make sure nobody asked questions — did she kill the cooks too?

The payoff was sweet, but the leaps in logic are a big WTF to the Game of Thrones writers.

Benjen Stark had been missing since Season 1. His Season 6 reintroduction was a big deal. Add in the fact that it brought a version of Coldhands, a popular book character, onscreen at last, and it was a very big deal. So why have him be in just two quick scenes before he says, “Okay bye long-lost nephew! And good luck getting anywhere, since you can’t walk and I’m not even leaving you with my horse!”

WTF, Benjen? At least wait until they can procure another horse, or help construct a wheelbarrow.

In the Season 6 finale, Varys seemingly teleported from Dorne to Meereen. Obviously the writers intended for more time to have passed than they showed — after all, we can’t stop to show tavern overnights every time a character travels, right? Wrong. The first few seasons did just that. To throw that out the window directly contradicts the notion that the world is spread out and Game of Thrones values journeys over destinations. This move went against everything the show has established, and it’s even prompted fan theories that Varys is a merman. WTF, writers?

We can only hope the Season 6 DVDs will follow up by showing extended scenes of Arya watching Soylent Green and Varys polishing his jet-pack.

More like this
Entertainment
6.21.2022 1:00 AM
Game of Thrones sequel could ruin the best part of the series finale
By Alex Welch
Entertainment
6.28.2022 12:00 PM
Westworld Season 4 theory may reveal a shocking Dolores twist
By Mónica Marie Zorrilla
Entertainment
6.16.2022 1:00 PM
How Rings of Power expands Tolkien’s world by “honoring his work”
By Eric Francisco
Related Tags
Share: