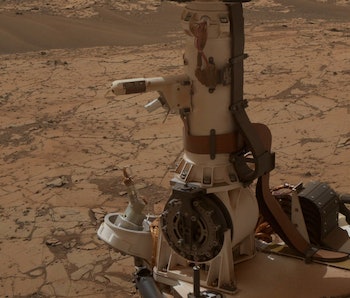 NASA has released an image from the Curiosity rover so we Earthlings can get a new glimpse at Mars.

The image was made from more than 130 pictures taken by the rover on August 5, and it shows the area called “Murray Buttes” on the lower part of Mount Sharp. All of the pictures were taken on the Curiosity rover’s 1,421st sol — a Martian day — spent roaming around the rocky red planet it’s been tasked with exploring.

“The relatively flat foreground is part of a geological layer called the Murray formation, which formed from lakebed mud deposits,” NASA explains in the photo’s description. “The buttes and mesas rising above this surface are eroded remnants of ancient sandstone that originated when winds deposited sand after lower Mount Sharp had formed. Curiosity closely examined that layer — the Stimson formation — during the first half of 2016 while crossing a feature called ‘Naukluft Plateau’ between two exposures of the Murray formation.”

The landscape presented has seen color adjustments that approximate white balancing, to resemble how the rocks and sand would appear under daytime lighting conditions on Earth:

Elon Musk wants to send an unmanned spacecraft to Mars by 2018. NASA said in July that it believes it can send astronauts to conduct a fly-by of Mars by 2033.

Musk hopes to beat that by sending humans to Mars in 2024. Sure, some people will probably die, but those are just footprints on the path to colonization.

This image shows what those astronauts might be able to see when they enter the planet’s orbit: A lot of rocks, some craggy mountains, and a lonely robot.