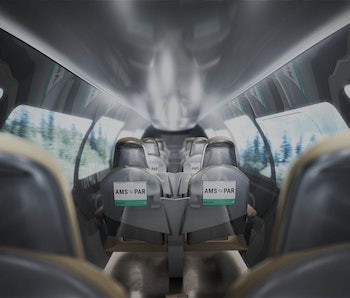 People have been thirsting to see and experience a functioning version of Elon Musk’s hyperloop ever since it first made headlines. Now, one Netherlands company called Delft Hyperloop promises to let you do just that. There’s just one catch: The experience is in virtual reality. For now.

Amsterdam-based Delft, the company responsible for this new VR hyperloop app, is giving the people what they want — a hyperloop experience — before the actual hyperloop becomes a reality.

The company revealed a half-size test pod in June, and created an app to celebrate its accomplishment and get people excited. With the app, available in the iOS and Android stores, and a VR headset or Google Cardboard, you can step inside what could become the future’s transportation system.

In addition to a preview of a hyperloop ride, which Delft says “represents what it may feel like to travel through the Hyperloop at the speed of sound,” users are treated to a narrated tour of Delft’s pod and its mechanics.

In 2013, Elon Musk, with help from Tesla and SpaceX engineers, released a whitepaper called “Hyperloop Alpha” that details how one could build a possible hyperloop. Musk, preoccupied as he was (and remains) with the aforementioned companies, had no interest in building the hyperloop himself, so he figured he’d let someone else capitalize on the invention. A few audacious companies have taken the bait and we’ve seen early evidence of those tests.

Hyperloop One got off to an early lead with the first successful test, but fell victim to controversy: one of the co-founders, Brogan BamBrogan, sued his own company, claiming a co-worker threatened him by leaving a noose on his desk. Hyperloop One countersued BamBrogan for $250 million, and its credibility as a functioning business plummeted. Hyperloop Transportation Technologies has also entered the fray, and occasionally does cool stuff. MIT is also developing a functioning pod. It’s an all-out race to functionality, and stress levels, it seems, are high.