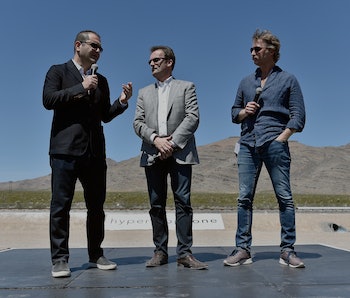 Hyperloop One responded to a lawsuit on Tuesday that alleges the company threatened cofounder Brogan BamBrogan with a hangman’s noose. Turns out, it wasn’t a noose. It was just “a rope tied with a lasso knot.”

On July 12, BamBrogan filed an outrageous lawsuit that read like a Hollywood script, alleging that he and three other employees had been victim of some highly unethical workplace behavior. Hyperloop One and its top-level employees — board chair Shervin Pishevar, board member Joseph Lonsdale, CEO Robert Lloyd, and chief legal officer Afshin Pishevar — were accused of nepotism, wasteful spending, verbal abuse, and, most damning, leaving a noose on BamBrogan’s desk.

The original suit was a huge credibility blow to one of the two foremost companies making Elon Musk’s hyperloop dream a reality. So, naturally, the company couldn’t take BamBrogan and friends’ — referred to as the “Gang of Four” by the Pinshevars — lawsuit and accusations lying down. On July 19, Hyperloop One, led by Lonsdale, Lloyd, and the Pishevars, filed a countersuit against the “Gang of Four” for $250 million.

The lawsuit demands payment of a quarter-billion dollars to Hyperloop One for “damages to the company’s reputation.” Hyperloop One (Team Pishevar and Friends) makes it seem as if BamBrogan and the others were acting out of spite because they knew they were going to get fired. Specifically, it states the original lawsuit was due to “an illegal and failed plot by four former Hyperloop One employees to take over the Company through a coordinated coup.”

Hyperloop One could argue that the original lawsuit is based on hearsay, but there’s one thing that can’t be denied: the rope left on BamBrogan’s desk that looks suspiciously like a noose. Security cameras caught chief legal officer Afshin Pishevar walking over to BamBrogan’s desk and leaving it there. Basically, Hyperloop One is resting its case on a matter of semantics.

“The Sham Complaint attempts to dramatize a workplace incident of a rope tied with a lasso knot, not a hangman’s knot, left on the desk where BamBrogan keeps his trademark cowboy hat into a story about a threatening ‘hangman’s noose’ that is tabloid fodder and fiction,” the lawsuit reads.

To Hyperloop One’s credit, the noose is indeed tied in the manner of a lasso, not a hangman’s knot.

Although, if you really get down to semantics, a noose is a noose no matter the knot. According to Merriam-Webster, a noose is “a large loop at the end of a rope that gets smaller when you pull the rope and that is used to hang people, to capture animals, etc.”

Also, keep in mind the very real and very dark history of nooses in America. Nooses and lynching are two inseparable concepts. If you need proof, consider the story of James Cameron, who survived a lynching in 1930.

Hyperloop One is correct that the rope wasn’t a hangman’s noose. It’s a minor technicality, though, and a lasso knot gets across the same general point. The gist of the countersuit: There wasn’t nepotism, verbal abuse, and a hangman’s noose. There were just some disgruntled top level employees who wanted the company for themselves and a lasso noose. Okay, yeah, that still looks pretty bad, and we’re not sure how all of it’s going to help commuters get from L.A. to San Francisco in less than an hour.