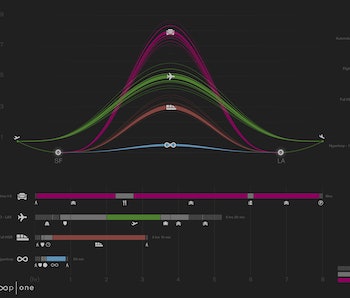 Los Angeles-based Hyperloop One shared an infographic today that shows just how much faster its still-in-development transportation method will be than planes, trains, or automobiles.

Last week’s short test run — it lasted only five seconds — came without any help from Elon Musk, who famously put the idea for hyperloop on paper just three years ago this August.

The new graphic illustrates the brevity of a trip between Los Angeles and San Francisco, once hyperloop gets up to speed. Meanwhile, a car ride between the two — with stops for gas and food worked in — is about eight hours. (However, if you really book it on the I-5, you could make the trip in five and a half hours.)

A flight (with the required TSA processing) is about five hours, 20 minutes, according to the graphic, and high-speed rail’s still about three hours, 10 minutes. The Hyperloop One hyperloop boasts a grand total of 50 minutes — including time to and from the station.

The hyperloop has quickly turned from a dreamy concept to a nuts-and-bolts project, even more so now that MIT has created one of the first passenger pods.