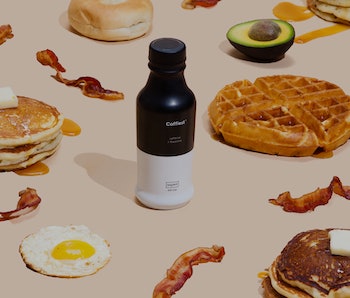 Soylent, the meal-replacing supplement drink, introduced a new product on August 9 that promises to combine your breakfast and morning cup of coffee. It’s called Coffiest, and it boasts 400 calories with approximately 150mg of caffeine, all in one liquid meal.

“Breakfast sets the tone for the entire day, but busy people all too often skip it entirely,” Soylent chief executive Rob Rhinehart writes in the Coffiest announcement. “Now with Coffiest you can get the nutrition your body needs enhanced with caffeine and L-theanine as mild nootropics. It also tastes great!”

That last claim will prove key to Coffiest’s success. Soylent isn’t particularly well known for tasting great. Some people create their own do-it-yourself variants with added flavor, but still end up craving real food instead of Soylent.

Yet others swear by Soylent. It’s cheap, convenient, and easy to track nutrients from its pre-made bottles. The company behind Soylent has raised oodles of money to disrupt the food industry — so for the time being, it’s here to stay.

Coffiest might help Soylent convince some of their naysayers. People love their coffee, and studies showing that it’s probably not going to make your heart explode and could keep your brain young make the precious beverage even more desirable.

Coffiest is just one of the additions to Soylent’s product line. The company has also introduced the Soylent Bar, which is meant to provide a snack or light meal to people who want to munch on their food instead of slurping it down. The bar is 250 calories and provides roughly one-eighth of an adult’s dietary needs.

These products show a continued shift in Soylent’s thinking. It started as a powder that people had to mix themselves, then it became a pre-made drink, and now it’s branching out into more flavorful and chewable forms. That could help differentiate Soylent from competitors in the future.

It also makes the company seem more approachable. No longer are people slurping down weird, flavorless goop that they have to mix themselves. Now they’ll just be drinking a nerdier version of the Slim Fast milkshakes, or eating a particularly geeky protein bar, both of which are more socially acceptable than buying a packet of powder named after a fictional product made out of people.