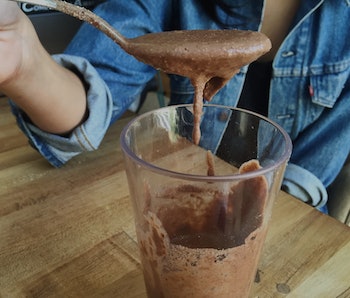 Subsisting on Soylent didn’t seem like much of a challenge. The science behind its “complete nutrition” looked sound, and I wasn’t worried for my taste buds, either — my undiscerning palate has led ex-boyfriends to accuse me of “eating like a peasant.” Problem was, Soylent was out of stock, and I wanted my flavorless complete meal replacement ASAP. So I decided to make my own.

There exists a surprisingly robust online DIY Soylent community where users share recipes for homemade nutritional goo, tagged with descriptors like “Weight Loss” and “Tasty!” While the site acknowledges that Soylent, officially, is a whole-meal beverage, it expands its definition of lowercase-s soylent to include any single food item — whether it’s a drink, brownie, custard, porridge, or soup — that provides complete nutrition for a reasonable price.

Soylent attempts to distill eating to the consumption of elements needed for survival. The recipes on the site are variations on a 2,000-calorie boilerplate designed with U.S. Dietary Reference Intake standards in mind. I chose one dubbed “Bachelorette Chow,” which promised 100% nutrition, ranked high on the “Favorites” list, and, thanks to its bump of cocoa, was most likely to resemble Futurama’s notorious food product. The recipe is the ladies’ version of the original “Bachelor Chow,” now known as “People Chow 3.0.1. - ‘Tortilla Perfection!’” which also flaunts its “fart-free” formula.

Bachelorette Chow consists of oat flour and cornmeal for carbs, whey protein, and soybean oil for fat, together with some ground-up vitamins and minerals. Because in the end, that’s all eating really is: Sucking down carbs, protein, and fat, with a dash of rocks.

Most of the ingredients for Bachelorette Chow were available at Whole Foods, but I had to turn to Amazon for choline bitartrate, a chemical needed for brain function, and for potassium gluconate, a salt that keeps the heart beating. Soylent is supposed to save you time and money, and considering that my shopping trip theoretically bought me a two-week supply of food for $40, it hit those marks.

Stacked with plastic tubs and foil packets full of minerals, my kitchen had become a chem lab. Scooping powdered food onto a scale didn’t offer the same circle-of-life connection you get from kneading dough or dry rubbing a rib-eye, but maybe I was missing the point. In the promotional video for Soylent, a supplement-swilling hero spends all the time he has saved on food prep becoming one with the Earth, building log cabins, and frolicking on the beach. Was DIY Soylent going to buy me time to better experience the world? I couldn’t wait to find out.

My daily ration of Bachelorette Chow fit into a Chinese take-out tub, which I brought into the Inverse office the next morning, mixing a third of it with water to a pudding-like consistency. As a breakfast food, it wasn’t half-bad — like a semisolid Clif Bar with a salty, corny aftertaste. Plus, after just three spoonfuls, I was feeling pretty full. Shit was dense. But after about 15 minutes, shit became too dense.

My soylent coagulated into a lumpy concrete, which hardened into a brown crust on my spoon. An editor looked into my mug and squinted at my cup of “dog food.” As it became increasingly hard to get down — was I supposed to chew it first? Scrape it off the spoon with my teeth? — even my peasant’s appetite died.

I made it through that morning feeling full yet unsettled. My taste buds weren’t in revolt. But my brain and stomach hadn’t figured out what to make of this pseudo-food.

I tried to improve my second dose by continually adding water to the chunky mix. Having to swirl my food around in a cup before scooping it up was disconcerting. My stomach was telling me yes — it was lunchtime, after all — but my mind was telling me no. It was a little early to be waxing philosophical, but I was beginning to question what it meant to be hungry at all. Maybe making my appetite obsolete was the key to making Soylent work.

I offered spoonfuls of it to my coworkers. Ben reluctantly choked down a mouthful and reported the taste was “the body of Christ mixed with Swiss Miss.”

Fatigue kicked in around late afternoon, as expected: My first two meals turned me off, and I hadn’t eaten enough to keep me going — even a full dose of 1,500 calories would’ve been less than what I normally needed, anyway. I had saved about an hour’s worth of time by not having to step out for food, but because my brain was so tired, the net benefit was pretty much zero.

When dinner rolled around, all I could think about was cheese. I wasn’t even that hungry — my stomach had become uncomfortably gurgly — but I craved something savory. Without the added cocoa, Bachelorette Chow would have been almost completely tasteless. I chewed through two Soylent meatballs and conked out earlier than I had in weeks.

The amount of energy I had the next morning was astounding. I felt light and alert, and I was convinced I could make day two of Soylent a better day. Taking the OG route, I chugged a 500-calorie liquid breakfast and hit the road on my bike.

Disaster struck on the Williamsburg Bridge. I am by no means an athlete, but I was exhausted. My legs quaked and my thoughts flickered, as I swerved clumsily through traffic. It made some sense, as Bachelorette Chow is relatively light on protein and heavy on the carbs, but by the time I made it into the office I was too light-headed to figure out whether my fatigue was physical or psychological. I just wanted something real.

One of the biggest drawbacks to gulping a liquid lunch is that it quashes the joy of socializing over a meal. My co-workers had the decency to take their gorgeous pizza slices and gloriously crispy chicken strips elsewhere as I nursed my gunk-drink in solitude. My stomach was full but my mind hankered. Drinking Soylent, I realized, made me sad.

Nutritionally speaking, my Bachelorette Chow had mostly succeeded in getting me through a day and a half of normal activity, and I don’t doubt that it would’ve kept me alive for several more. Mentally, though, I was through. Around 6 p.m., I caved and had the most fulfilling, delicious can of Sixpoint I’ve ever had in my life. Then I ate half a brick of cheese.

Eating is fun, an emotional and physical pleasure. Soylent trades that joy for efficiency. Even if I could sustain that early-morning day-two feeling forever, I don’t think I could take the stuff for very long, unless perhaps everyone were drinking Soylent. Maybe that’s the future we’re heading toward — one where we collectively free up our time and money and find better ways to spend it together. Soylent’s mantra is “Use less. Do more.” It’s a noble goal, but I find myself stuck on the “doing more” part. What, after all, would I do if I had more time? Likely, I’d gather friends in my kitchen and share Merlot, fresh baguettes, warm brie, and duck confit — eating together, with gusto and with marked inefficiency.