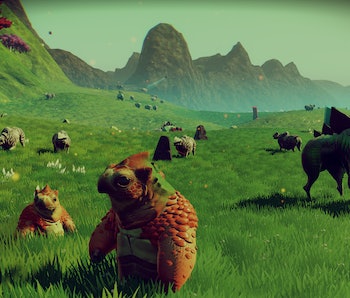 Sorry, world. Planetary explore-‘em-up No Man’s Sky has officially surpassed our planet in the sheer number of known species. Sean Murray, founder of the game’s developer Hello Games, tweeted the stat Wednesday when discussing how rapidly the game has grown in scale.

Players have discovered 10 million creatures in the game. By comparison, a study published in PLoS Biology in 2011 estimated that there are around 8.7 million species on Earth, total, and we’ve only discovered a paltry 1.2 million.

No Man’s Sky has a lot of creatures because of its unique structure. Players are encouraged to explore a universe brimming with planets, plants and animals. Unlike most games, the universe is procedurally generated, meaning that instead of the universe being fully created by the artists, the game’s data contains some designs and code that create the environment — including animals — as needed.

Procedural generation allows for some staggering stats. The game contains 18.4 quintillion planets. These are fully fleshed-out worlds that players can walk all the way around. Using the spaceship, players make their way through the galaxy, naming creatures and planets that get uploaded to the central servers. Players that encounter something already named will see the name in the game, but considering the size of the universe, it’s going to be a long time before everything is named, if ever.

The system works very well in practice. Chances are, if a creature looks threatening, it probably is. The game allows for a wide variety of character designs, keeping the discovery aspect interesting hours after the start.

Although 10 million species sounds like a lot, there’s always room for improvement. Murray told the Daily Star that the procedural generation systems can always update further down the line to allow for more detail and variety. Sony is expected to unveil the ultra-powerful PlayStation 4 Neo console, which could push procedural generation games like NMS to new heights. Murray said that the extra processing power could have a big impact on the game, putting more leaves on trees and creating worlds with richer, more dense ecosystems.

Hello Games has already released a huge patch for the game on day one. The patch changes the game completely, introducing a huge amount of new features: greater creature diversity, galaxies 10 times larger than before, planets with extreme atmospheres and improved graphics. No Man’s Sky is already at 10 million discovered species; who knows how many more its universe holds?

More like this
Science
7.2.2022 12:00 PM
Why is my cat scratching furniture? The answer might surprise you
By Tara Yarlagadda
Culture
7.1.2022 9:00 PM
Male celibacy has evolutionary benefits — but not for the reasons you think
By Ruth Mace, Alberto Micheletti and The Conversation
Mind and Body
6.29.2022 6:30 PM
How music makes you feel may depend less on your brain than scientists once thought — study
By Allison Parshall
Related Tags
Share: