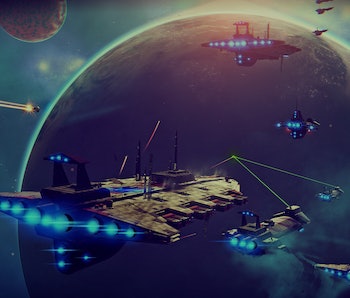 It would seem that No Man’s Sky developer Hello Games has saved the best for last. In the run up to the release of 2016’s most anticipated video game, the UK-based studio has released a series of trailers designed to preview the exploration-heavy title. While there’s still plenty to discover about No Man’s Sky, the game’s final trailer, entitled “Survive, brings No Man Sky’s toughest hurdle clearly into view – everything, everywhere.

In order to do anything in No Man’s Sky, you’re going to have to keep your avatar breathing, and that’s going to mean overcoming harsh environments and merciless wildlife while you’re wandering around Hello Games’ beautifully rendered galactic garden.

For those players who have been wondering about what exactly they’d do with their time in No Man’s Sky beyond wander around and point at the procedurally generated animals, now we have our answer. Okay, sure, Hello Games has previously hinted at some vague quest to reach the center of the universe, and they’ve offered glimpses of the trading opportunities that will be available in the previous trailer.

In that short video, players were given a brief introduction to the game’s economy, which will see real-world players collecting minerals and resources and then putting them towards the purchase of upgrades for their gear. Hello Games isn’t going to just hand over its treasure, though; you’ll have to take it. That’s going to mean braving the dangers that — surprise, surprise — are lurking around every freaking corner.

The Universe’s Out to Get You

The “Fight” trailer released on July 20 already gave players a glimpse of the opportunities for violence that can be found throughout No Man’s Sky’s incredibly expansive Universe. Gamers were well aware that the game would let them attack trade convoys or go big game hunting.

What players haven’t seen before is the hostility inherent in simply setting foot on an alien planet. In the “Survive” trailer, we’re treated to several examples of the hazards that might be found on the planets and space stations we’ll encounter along our journey.

Combine all those environmental concerns with the ones we already know about, like space pirates and hostile fauna, and suddenly Hello Games’ sandbox isn’t looking quite so friendly.

While we still don’t know all that much about No Man’s Sky, we do know one thing for sure. Hello Games has repeatedly stated that when the game opens, players will be spawned in a random location on the outer fringe of the Universe. What’s more, the player will have in their possession only a basic ship and the lowest-rung multi tool possible. In short: from everything we’ve been led to believe, players won’t be equipped to handle sub-zero temperatures or the the Ravenous Bugblatter Beast of Traal right at the very beginning of the game.

More than likely, Hello Games has thought about this possibility and players won’t be spawning in the middle of an impossibly difficult environment (the same way you never spawn inside a volcano in Minecraft. Otherwise, some players just might find No Man’s Sky to be a truly punishing exercise.

Progress Will Happen in Baby Steps

The “Survive” trailer hides within it some indicators of the No Man’s Sky experience. For example, no matter how random the game claims to be, it’s likely that the greatest dangers will be encountered as you get closer to the center of the game’s Universe, like a built-in difficulty curve that dares more the more intrepid to strike deeper and deeper into the heart of Hello Games’ 18 quintillion-planet Universe.

Those people searching out the serene(ish) experience shown off in the game’s “Explore” trailer might find their game time spent skirting the edges of the galaxy.

However you approach the game, it seems that progress won’t be simple in No Man’s Sky. Between hazardous environments, angry inhabitants, banking resources, and seeking out upgrades, Hello Games is promising an experience with enough dilemmas to insure that the average player will need to plan their course carefully and keep their head on a swivel if they hope to survive.