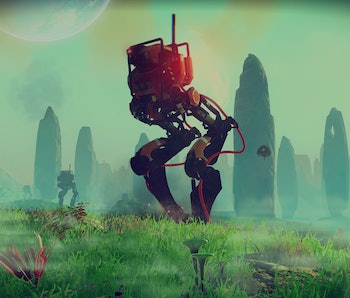 You awake on a planet after a devastating crash. Your ship is damaged almost beyond repair. Marooned on a hostile alien world, with nothing functioning but your basic mining laser, it’s up to you to keep your head and get back into space. From there, it’ll be on to the center of the galaxy. First, though, you need to scrounge your way back from the brink and get your ship up and running. Here are a few tricks to help you do just that.

Mine Everything … Except Carbon

When you’re just starting out, you’re going to have nothing, so be sure to start shooting at random crap with your mining laser. However, you’ll likely notice several flying robots on every planet you visit. These are sentinels and their job is to prevent you from destroying carbon-based life forms (including plants). There’s more to resource management, but that’s a start.

If you want to get shot at, go ahead and start murdering living things, but at the beginning, a swarm of these little flying sentinels will get you killed. So be warned.

Don’t Lay on the Trigger

Your mining laser has finite ammo; in addition, it’ll overheat if you press and hold your fire button. Fire in bursts to save ammo and keep your rate of fire more consistent.

Listen to the Voice in Your Head

Your exosuit talks to you in a sweet mechanical lilt that’s easy to ignore. Don’t do that. Your suit will constantly be feeding you readings about the environment’s toxicity and temperature, so be sure to pay attention to your levels, and keep replenishing those levels with the resources you’ll scrounge from the planets you explore.

Repair the Tools in your Suit First

Sure, you want to get those thrusters up and running, but the most efficient way to gather the resources you’ll need to get into space is to fix the tools on your suit. The binoculars and the scanner are invaluable when it comes to finding the specific resources you’re looking for. Used in conjunction, these simple (and easy to repair) tools will help increase your range dramatically. Once they’re repaired, simply hit L3 to do a local scan of the area.

Oddly enough, No Man’s Sky’s procedural generation is pretty good at crafting animals with a certain specific feel to them. What that means for you is simple: if something looks dangerous, the odds are good it’ll try to kill you. You may want to get that credit for cataloguing the beast, but keep in mind that you can analyze cadavers, too. Sometimes alien life just needs to get put down, you know?

Don’t Be Afraid to GTFO

Sometimes, if you tackle a creature one on one, you can pull off a win. Early on, though, if you’re heading into static, it might just be a good idea to tuck tail and run. There’s no shame in surviving, really. This goes for space encounters, as well, because roving pirate gangs are a thing, they will attack you, and you’re not equipped to fight them right off the bat. So, if all else fails, run away screaming.

Seek Out the Question Marks

While you’re exploring the surface of a planet, your HUD may occasionally plop a little green question mark in the distance. These can be anything from intergalactic trading posts to lucrative caches to mobile save points.

Stay Close to Your Ship

Speaking of save points, entering and exiting your ship is one of two ways to save the game (and mobile save points aren’t something you can really count on). If you run up against (or you think you’re going to run up against) some heavy action, it’ll just be a short jaunt back to your ship to jump in the cockpit and then jump back out. That way, if you die, you won’t lose much.

If you roam too far from your ship, you can also wander out of the range wherein you can transport items from your exosuit into your ship’s cargo and vice versa. There’s nothing more frustrating that running upon a sweet stash of resources only to discover that your suit’s inventory is full and you’re too far away from your ship to transfer items and free up space.

Try to think of No Man’s Sky as an intergalactic zen garden. Though danger exists, it’s minimal for the player who moves deliberately. Moving at a plodding pace and really absorbing your surroundings not only has a calming effect, it makes each hurdle more easy to tackle. No Man’s Sky is supposed to take a long time, people. Just settle in and enjoy the ride.

More like this
Gaming
Sep. 28, 2022
Demon's Souls and 9 more great sci-fi and fantasy game deals on PlayStation
By Robin Bea
Gaming
Sep. 28, 2022
How to unlock the BP50 in Call of Duty by using an ACOG optic
By Joseph Yaden
Gaming
12 hours ago
Nearly 2 years later, Cyberpunk 2077 is still a terrible game — even with fewer bugs
By Willa Rowe
Related Tags
Share: