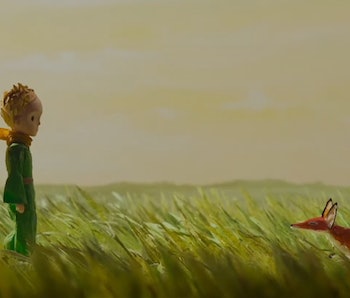 Antoine de Saint-Exupéry’s The Little Prince is the fourth most-translated novel in the world, having been rendered in more than 250 different languages and dialects. If you’ve ever taken a French class in high school, chances are you came across this whimsical tome. Unfortunately for you, the copy you read probably wasn’t the best one.

Saint-Exupéry was a French aviator-turned-novelist whose most famous work, The Little Prince, is beloved worldwide. But something has been brewing with English readers of the staunchly French text over the matter of translation. Katherine Woods translated the novella in 1943, the same year the French original was published. The Woods English text is considered a more poetic, and truer version to the original French text, despite some high-profile mistranslations – more on that later. Woods’s translation would be the standard English version for 52 years until Penguin published a new iteration in 1995. Five years later, Richard Howard’s version would become the new English standard.

Now, several fans of The Little Prince, of which there are many, have criticized Howard’s translation. The SF Gate’s review by David Kipen writes, “”The Little Prince” is a masterpiece inseparable from Katherine Woods’ matchless original translation…A different, inferior version 57 years later doesn’t have a prayer.”

This sentiment is echoed across the many blogs dedicated to the history of The Little Prince. Howard’s translation is noted for its more colloquial rendering of the original French text, modernizing and streamlining the often meandering French lyricism for plain English. Woods, as someone who lived in the same time as Saint-Exupéry, translated the text, meander and all, to capture the same lyrical spirit of the age when it was written.

Woods’s version includes French-to-English translations like “spring of fresh water”, “primeval forest”, and “tippler”. Howard translates the same words as, “water fountain”, “jungle”, and “drunkard”. By streamlining the language to something that is more easily understood (what even is a “tippler”?), Howard has removed something valuable from not the original French text, but rather, the original English translation.

There are also sentimental reasons as to why the Woods iteration might be preferred among die-hard The Little Prince fans. Her translation existed in circulation for over 50 years before going out of print in 2000. That means that anyone who’s read The Little Prince prior to the year 2000 probably read Woods’s translation, and the drastic changes made in the Howard translation would be instantly noticeable – and unappreciated by readers who might have read the novella anytime during the 50 years the Woods translation was circulated. This compared to the 16 years the Howard translation has been circulating, and statistically more people would have grown up with the Woods translation.

Now it turns out that the matter of Saint-Exupéry’s translation matters a great deal to fans of The Little Prince. A fan who collects Asian translations of the book even devised a system of whether or not these Asian texts were translated from the original French, or from an English version, and if so, which. Called the “Sheep Test”, the system requires an Asian reader to look at a specific passage in their novellas. Woods famously mistranslated the word for “Friend” (ami) as “Sheep”.

Now, if the Asian text translates the same passage “sheep”, then the Woods translation is the most likely basis used by the Asian language translator. But if the passage includes the properly translated “Friend”, then it could actually mean two things. That the Asian translator used the original French text, or a subsequent English translation that correctly translated ami as “Friend”.

The intense speculation over translations shows just how prominent Woods’ translation is to fans of the French novella. While Howard’s version isn’t universally derided, his detractors have kept the memory of the Woods version alive and well nearly 75 years later.

If you’re looking for a copy of the Woods translation however, good luck. A copy of the fist-edition Woods text is currently $895 on eBay, but professional book collecting websites show specific Woods translations into the thousands of dollars. You can still pick up a second hand copy for around $30 USD, but compared to the $8 version of the Howard’s text, it might not seem worth it.