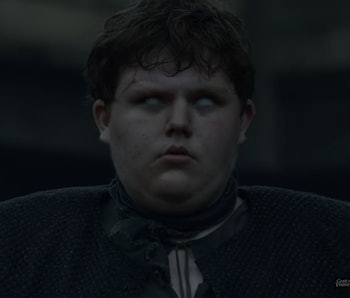 Game of Thrones is an international hit. It airs in over 170 countries, and for the most part, the scintillatingly stabb-y action translates, regardless of the language. However, there’s one thing that doesn’t work so well in other languages: portmanteaus.

GoT isn’t exactly a pun or portmanteau-filled show, but last night’s episode “Door” hinged on one clever, and emotionally devastating piece of wordplay. In this season’s first truly traumatic closing scene, Hodor — whose real name is Wyllas — meets a tragic end at the hands of an army of Wights, giving his life so Bran and Meera can escape. In a vision to the past (because casual trips down memory lane are quickly becoming a thing), Bran mistakenly wargs into Hodor’s younger self, with only one thought echoing through his mind: “Hold the door!”

Hold the door becomes Ho-Dor, in a brilliantly acted scene by both Kristian Nairn and Sam Coleman (who plays the younger Wyllas), who collapses as Bran’s psychic mind powers force him to witness his own death, years in the future. After the episode, showrunners David Benioff and D.B. Weiss confirmed that Hodor’s origin story was straight from George R. R. Martin himself. Here’s Isaac Hempstead-Wright and Kristian Nairn discussing the scene.

In other languages, though, Hodor’s big reveal (and tragic death) probably didn’t play out quite the same. When ‘Thrones is dubbed, character names are usually kept the same, so Hodor is still Hodor even though “hold the door” would be something completely different.

In French, for example, “hold the door” translates to “tenir la porte,” so Hodor would be Telpo. In German, it’s “halten sie die tür auf,” which is a hell of a mouthful (typical German), and would make Hodor Halsiditüaf (or something like that, who knows?). In Hindi, one of the big languages Game of Thrones is dubbed into, Hodor translates (and transliterates phonetically) to “daravaaja pakado,” so Hodor’s Hindi name would be Darpak.

If you want some extra trauma, here’s the Red Wedding dubbed in French:

Of course, GRRM probably wasn’t keeping the dubbing companies in the know about a plot twist he planned back in 1994. Maybe that’s why it takes him so damn long to finish a book.

More like this
Entertainment
7 hours ago
6 Game of Thrones episodes you must rewatch before House of the Dragon
By Alex Welch
Culture
8.3.2022 9:00 AM
7 amazing sci-fi shows and movies coming to HBO Max in August 2022
By Robin Bea
Entertainment
8.15.2022 5:00 PM
She-Hulk will finally solve a confusing Avengers: Endgame mystery
By Alex Welch
Share: