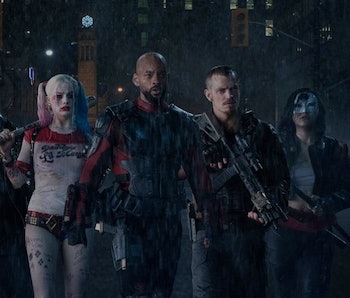 The craziest element of Suicide Squad is not the Joker; it’s that it somehow got past presumably hundreds of pairs of eyes that felt confident saying, “yes, this is a movie.” It manages to have undercooked characters in spite of giving them a hour long introduction, its villain is nonsensical, and it has no real sense of story progression or moments that can definitively be called “scenes.” But, in spite of its lack of traditional “movie” elements — which critics have universally noticed — it does contain some standout moments that hold promise. Here are the film’s silver linings.

Though the overstuffed Suicide Squad script doesn’t allow any characters to feel fully developed — in trying to spotlight everyone in its Game of Thrones sized cast, it ends up ultimately serving no one — Margot Robbie and Viola Davis both rise above the material. Robbie and Davis both give powerful performances that bring two of the most fascinating women in comics to life onscreen. (Give or take enough Harley Quinn ass shots to make Michael Bay say, “uhh, maybe you should chill on that, find some subtlety.”)

This is significant for two reasons: Although DC is currently lagging behind Marvel at making watchable movies with discernible plots, it’s actually ahead in portraying intriguing three dimensional female characters. Go ahead and celebrate that win, DC. That matters. It also means that if Harley Quinn and Amanda Waller were to get their own movies, in the hands of the right writer and director, they could be among the best to emerge from the cinematic superhero era.

2. Will Smith saying “what are we, some kind of Suicide Squad?”

Will Smith is also one of the film’s saving graces. He doesn’t do anything new — it’s a typical Will Smith performance, full of charisma and swagger — but seeing him don a superhero mantle recalled his earlier work in gems like I Am Legend and Hancock, and when he’s given the unenviable task of saying the movie’s name very obviously, he all but winks at the camera. Few other actors could make that moment work without inciting a face-palm from the audience, but it feels almost fun in Smith’s hands.

3. A Keen Appreciation for Meat Eating

Between Amanda Waller’s thirty minute introductory monologue — which she does over dinner, chewing on an impressively sized piece of steak — and Rick Flagg’s pensive window-gazing — which he does while chewing on an impressively sized hunk of meat — this movie is a carnivore’s delight. Say what you will about the film’s racial stereotyping, but it has lots of representation for carnivore-kind.

Suicide Squad devotes time to all its characters backstories. We predicted months ago that following the Avengers model without building up to it would be a huge mistake. You might think flashbacks galore makes these characters feel well-developed, but they’re all either painfully laden in ethnic stereotype (the Latino gang member; the dutiful Japanese widow who speaks to her dead husband in a sword) or they’re far too rushed to feel meaningful. Harley Quinn’s in particular desperately needs its own movie to breathe.

Will Smith’s Deadshot is not exempt from his backstory feeling paint-by-numbers: He has a morally dubious profession but is also devoted to his adorable daughter! We certainly haven’t seen this in every mafia movie, with Hawkeye in The Avengers 2, with Nicholas Cage’s character in Kick-Ass, and in nearly show in the age of antihero TV. Nevertheless, when we first see Deadshot perched on a rooftop negotiating a business deal, it’s the film’s least-rushed flashback. It’s no coincidence that it’s also the most fun.

5. American political accents outside of SNL

Between Harley Quinn’s thick Brooklyn accent, in which she made it clear she Felt the Bern (though she seems more of a Gary Johnson type) and Rick Flagg’s accent, which seemed to be doing an impression of Will Ferrell doing an impression of George W. Bush, Suicide Squad featured more regional American accents than we usually see outside of Saturday Night Live impressions.

6. Hoyt from True Blood as the Joker’s henchman

Every former True Blood viewer remembers Hoyt Fortenberry as a good ol’ Southern boy in his natural habitat. More than any other character, he was simple and pure: He just wanted to have a relationship with his girl, be a loyal friend, and a dutiful son. In other words, he was the most Hufflepuff character in the whole cast. When Jim Parrack — who played Hoyt — turns up as the primary henchman to Jared Leto’s Joker, it’s a delight because his Suicide Squad character is not that different from Hoyt. He’s a highly efficient henchman and a hard worker. He probably has a nice Southern (vampire) girl waiting at home. We can just see the True Blood and Suicide Squad crossover waiting to happen.

Captain Boomerang, is, as predicted, one of the movie’s standout characters. As a madcap jewel thief with an exaggerated Crocodile Dundee accent (how would we know he was The Australian One if he didn’t say “mate” every other word?!), he demonstrates a sense of chaos that this film’s Joker lacks, not least because he is given no motives and his place in the group dynamic is never once developed.

At one point he throws up his hands and ditches the group, only to return the very next scene for no reason. His fluffy pink unicorn is the embodiment of this sense of anarchy: It’s never explained why the hell he carries it around, and it isn’t in the comics either. If you were underwhelmed by the Joker — and it was hard not to be, after all those reports of Leto’s “method” preparations — Captain Boomerang and his unicorn embody Suicide Squads stretch toward the chaotic.