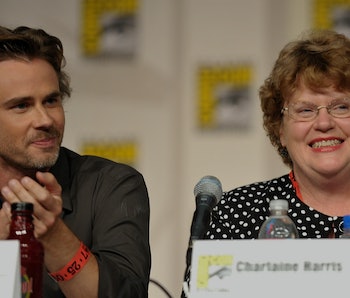 In Asking the Prophet, we use our alien probes on the brains of sci-fi, fantasy, and speculative fiction writers. This week, we spoke to urban-fantasy author Charlaine Harris about watching her work make the jump from page to screen in HBO’s True Blood and NBC’s upcoming Midnight, Texas, navigating fan expectations, whether she’ll ever return to vampires, and more.

You’ve been one of the top names in the urban-fantasy genre for a while now. How have you seen it evolve during your time in it?

Well, there wasn’t an urban fantasy when I started out. That was kind of something that evolved around the first few writers in that area, like Laurell K. Hamilton, Jim Butcher, and Patricia Briggs. We all started out at roughly the same time. So it feels very exciting to have been in on the ground floor of urban fantasy and to see what’s happened to it since then. Though I keep hearing rumors that it’s a dead sub-genre, I still see books selling very well that are by people who are already in the field.

Were you surprised by how the Southern Vampire Mysteries series took off?

Oh, who could predict that? I would have been glad for half of the success! I could never have imagined anything like that happening to me. Some days it’s still hard to believe.

True Blood’s first season stuck pretty close to the book, but it diverged from the books dramatically in later seasons. Was it odd to see your world on TV depicted differently? Or did you enjoy it?

I certainly watched every episode. They were real[ly] good about sending me a screener ahead of time so I wouldn’t be caught not knowing what was going to happen. Of course, the differences became more and more remarkable as the series progressed because Alan [Ball] had his own goals as a creative person. I began to see that it was never going to come back to any of my plot lines but, you know, my books were still sitting there. They were just fine. Anybody could buy them that wanted to. I made my peace with it.

Will you be more involved in the adaptation of Midnight, Texas?

I’m not an expert of producing network television so I would hardly expect to be heavily involved in it. I’m going to visit the set, I’m going to meet the actors, and I’m going to see how it’s all going. Of course it’s going to be different from the books because the necessities and presentation are just different from a book. But I look forward to seeing the differences and it’s always really interesting to see my vision brought to life, shown through another person’s lens.

Which True Blood character or cast member most closely embodied how you envisioned the character?

Vampires had a boom in popularity when True Blood started. They kind of have become less popular since. Do you think they’ll become popular again or is the vampire moment peaked?

It’ll resurge. Maybe not for 10 or 15 years, but it’ll come back. Vampires are seasonal! I’m kind of finished with it. There is one vampire in the Midnight series, but he’s a very different kind of vampire and I approach him as totally scary, not the sexier version in the Sookie novels.

What are some books you’ve read recently?

I read a lot. Mostly fiction. Every now and then some non-fiction. I’ve published what I really have enjoyed on my blog on my website. I like other writers to get recognition also. There are a lot of things I like to read. I like any book by Anne Bishop or Patricia Briggs. I’m a huge fan of Daniel O’Malley. His book The Rook is one of my all time favorite books. And the sequel was just as good. I also love Lee Child and Robert Crais. There are so many writers that I just automatically buy and read.

Your series all vary in length. Do you prefer shorter series or longer series?

I just have a story to tell and it takes me different amounts of times to tell that story. With Sookie, I just finally thought, I’ve said everything I have to say about her and it’s time to move on. That was right for me. Though I do miss, there are a lot of things about writing Sookie, but there are a lot of things I don’t miss, like the overwhelming reader involvement, which can be very flattering and pleasant but can also be kind of scary sometimes.

The end of the last Sookie book got leaked and unfortunately it wasn’t the end a lot of people apparently expected. I got a big wave of hate and that was definitely the hardest thing I’ve ever had to deal with. I could see which was the wind was blowing the last two books and I did everything but draw a runway with a neon sign on it to the ending I was going for. I thought, “I’m not going to ambush them, I want to give clues that I’m not going to end the series the way they think I am, apparently.” But perhaps I was more subtle than I knew, although that’s hard to believe! But apparently, some people just didn’t want to read the signals I was sending out and they were really very angry.

How did you prevent that from affecting you?

I had to build up a method to deal with it. At first I was just devastated. I couldn’t write for a couple of months. I felt crippled. I never expected anything like that. The internet certainly emboldens people to say things that they would never say to your face. I’ve developed emotional tactics to deal with it and I know that it’s not the end of the world for my career or my readership. I was just so devastated by that, but you just have to deal with it and more forward.

Since you’ve written so many books, is there one that most pleasantly surprised you in how it came out?

Well in my experience, if you think of something really horrible to do to your lead character and you think, oh man should I do that or not, you should do it. Actually. Obviously you should do it! I think the books I have liked the most are the books where I went places I wasn’t expecting to go. Particularly, probably An Ice Cold Grave, which is one of the Harper Connelly books, and to me it’s one of the best books I’ve ever written. It didn’t sell better or worse than any of my other books and it didn’t get any more critical recognition, but to me I feel like I achieved what I set out to do in that book.

What are you working on now?

I’ve gotten the third Midnight book turned in, Night Shift. I’m working on the first Aurora Teagarden I’ve written in probably thirteen years. I’m writing a conventional mystery again. Honestly, it’s been a lot of fun to do that! I’ve really enjoyed it.

What excites you most about the future?

I have a hard time setting goals for myself now because I’ve kind of zoomed past everything I ever thought I might attain. But I’m always trying to set goals to stretch myself as a writer, you know? If I had wanted to keep on in the super money making business I would have written Sookie forever. But there comes a time when you think “I’ve told this story, I really want to do something new.”