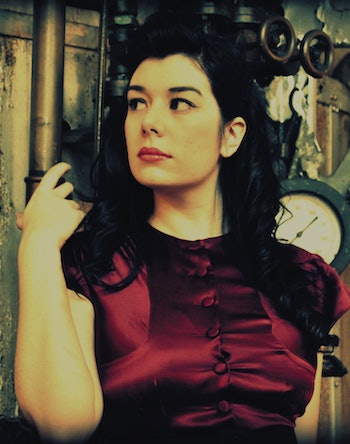 In Asking the Prophet, we probe the brains of sci-fi, fantasy, and speculative fiction writers. This week, we spoke with Catilin Kittredge about steampunk, switching between novels and comics, the evolving genre of urban fantasy, and more.

What comes first in your world building: environment or characters?

I’ve written 16 books at this point, so I’ve had it happen both ways. It’s usually character that comes to me first and then I start investigating what their story is, what kind of world they live in, and what kind of narrative I can build around them. But sometimes I have an idea and think that would be cool and then figure out who can populate the world that I come up with.

What attracts you to steampunk?

What is it about the Victorian era that makes a fun sandbox?

It’s a super interesting time period historically because there was so much changing in the entire world. It was the second half of the industrial revolution; it was the end of colonialism in a lot of places. There were big leaps forward in science and technology — you’re really on the cusp of a turning point of so many things that shaped our modern world. You would be hard-pressed to not have a good time writing alternate history or sci-fi stories during that time period.

What are your influences?

A lot of my influences are actually not sci-fi or fantasy at all. I grew up mostly reading horror and mystery. I read a ton of Stephen King books. Lots of nightmares there. I used to love reading old detective novels. I was just a fan of a good, tightly told story, more than anything. My interest in fantasy actually came much later, when I was in college. That’s when I got into sci-fi and fantasy stuff and decided that’s what I wanted to write. I’m actually not a sci-fi fan from the cradle. But they still let me in their club, so that was nice.

What sparked your interest in urban fantasy?

I love the Tolkien stories but I didn’t grow up with them like a lot of fantasy writers of my generation did. I grew up with the hardboiled packaged stories; modern day horror and stuff that’s a little bit grittier and more reality-based. So when I found out what urban fantasy was and started reading it, I was like, “oh, this is where I belong. This is where I’ll be writing stories my whole life.”

What’s the most challenging part of writing urban fantasy?

For me it’s the balance. You want to be able to incorporate the fantastical and the mundane in such a way that keeps the reader interested and keeps the story moving forward. Each element of the fantasy and the mundane has to be absolutely crucial to your plot — so you can’t really cling too far one way or the other. Sometimes that can be challenging, I would imagine, for anyone who writes in the genre. For me, it’s keeping it grounded but still having that indispensable fantastical element running through the whole story.

When you do alternate history, do you have to do a great deal of side reading?

It depends on what story I’m working on. I also write comic books and I just finished the first story of a sci-fi thriller that’s partially set during the Cold War and operatically set in modern day. I’m a big buff in Cold War history, so I had already kind of done the reading already. But I did find myself having to do a lot more research that I normally do to kind of front load before I start writing something. It varies, but I love to read and I’m a giant history nerd, so there’s a lot of side reading involved and I’m always up for it.

What was the most interesting tidbit that you read recently that you’d want to use for a future story?

I’ve been reading so much great stuff recently. I’ve been reading a lot about the Kennedy assassination for a story that’s going to take place in the comic that’s coming out way down the road. I read this biography of Allen Dulles, who was a director of the CIA at one point. There was a lot of his personal diaries that had never been released before. Hearing some of the stuff that went on behind the scenes, like the Bay of Pigs and around the assassination was really fascinating. So that was probably the best book I read recently as far as cool stuff I didn’t know.

There’s a series that a friend of mine writes that’s been out for about a year. It’s called The Wicked + the Divine. It’s super amazing and I look forward to every issue.

It’s great. I love comics. They’re just so different from writing books, it gives me a great vacation from the other when I switch between processes. I think the risk of burning out is a lot less for me since I started doing both things. The comics are great because you get to tell stories in a serialized format and you get to come up with new stuff every month. Novels are great because it’s more like a slow burn kind of work and but’s a bigger story together all in one place. I know some people who do both don’t enjoy switching back and forth, but I really do.

Is it difficult to switch gears between solitary writing on novels and collaborating with an artist on comics?

Yeah, I used to tell myself that I was a solitary workaholic hermit and I didn’t like to collaborate. I collaborated on a novel a while back and that was great, but I was like, “that was a fluke it’ll never happen again.” But then I got into comics and I love working with another person, especially an artist. I crave it now when I’m off writing books. I’m totally spoiled now and I guess I’m just going to start writing graphic novels so I can have that other person to bounce ideas off with and procrastinate with when I’m not feeling it. I’ve been blessed that I’ve had nothing but fantastic, amazing, collaborative, open-minded artists on all my comic projects so far.

What TV shows are you into?

I love TV. I’m addicted to Hulu and Netflix, and if that’s wrong I don’t want to be right. I’m really enjoying all of the DC superhero shows that are on the CW like The Flash and Arrow and all that stuff. I’m always really excited for those. And there was just a new season of House of Cards, which is my favorite show ever. I’ve been really enjoying Blind Spot, it’s kind of dorky but I love it. There’s so many great female lead shows that the networks are doing, especially this year. It’s been an embarrassment of riches.

As comics become more popular, what excites you most about their future?

I just love that in my lifetime, comics have become this totally mainstream thing that everyone knows about. I’ve been into them since my freshmen year of college, and back then, it was a nerdy pursuit. I think it’s an amazing art form that everyone should be into. Especially as far as being a creator of comics, the sky’s the limit right now. There’s so many amazingly talented people doing great books. There’s never been a better time to start reading comics. There’s something literally for everyone.

What about urban fantasy? What makes you excited about the future of that?

I love that urban fantasy is relatively new but it has such staying power. It keeps evolving and changing. I think it’s just so cool that it’s this scrappy little genre that’s still there. It’s seen success and it’s awesome that it’s still thriving.