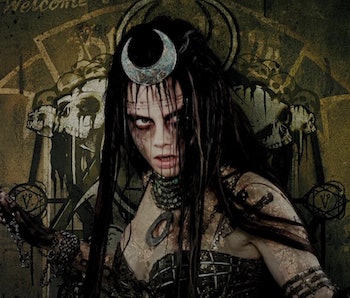 Here’s a conundrum: If you turn the world’s worst super villains into the good guys, who the hell are they supposed to fight?

Suicide Squad is not a good movie, but it’s more disappointing than it is truly awful. Really, it’s an aggressively mediocre and by-the-books action flick that, without the DC Comics characters and big name stars, would be the movie you’d see in the mid-2000s and then forget immediately – and forever. That’s a bummer, because its premise — bad guys weaponized for insane missions on behalf of the citizens they had wronged — should have freed it from the comic book movie tropes that have been pummeled into our collective conscious over the last few years. Instead, Suicide Squad fell into each and every one of them.

There is no more clear example of the film’s adherence to comic book movies’ tenets of mediocrity than its sorry excuse for an antagonist. To keep it simple: a bunch of super villains are released from prison temporarily so that they can fight bad guys, and inevitably, one of them defects and becomes the bad guy that they need to fight. (This is an accidental mini-trope for DC; the major villains in Man of Steel and Batman v Superman only come down to Earth because Supes is here, already).

It’s a fine premise — that some evil people are just not redeemable and don’t deserve a second chance — but the execution here is awful. Director David Ayer to have Enchantress, a spirit witch who consumes an otherwise innocent archaeologist named Dr. June Moon (Cara Delevigne) and forces her to do her dubious bidding.

Once Enchantress takes full control of Dr. Moon’s faculties, she gets to work on doing some really run-of-the-mill evil shit. She grabs a random guy on the subway platform, snaps his neck, and somehow infuses his corpse with her equally evil brother’s soul. This turns the nameless guy into a gigantic golden CGI monster who immediately begins fucking things up.

Because the movie is chock-filled with different characters — it required a major reshoot to create a prologue-like first act to introduce each of them — there’s not much time to really get into Enchantress’s motivations. We’re just supposed to expect and accept that she’s evil.

Enchantress and her mute, half-rendered CGI brother endeavor to destroy and take over the world, for reasons that are never quite explained. We know that Enchantress was an evil witch back in the day, before being forced into some strange statue for thousands of years, but why she wants to murder everyone on Earth is unclear — that’s just what evil people do. And so, with the power of many computer animation artists at her side, she commences a gigantic storm from another dimension that quickly begins to destroy huge swaths of the planet. Even more exhausting are the faceless soldiers that she conjures to fight the anti-heroes of the Suicide Squad; if that’s meta-commentary on Ayer’s part, it doesn’t hit its mark.

Enchantress is more or less the same exact villain as the equally underwhelming, CGI-heavy Apocalypse, played by a very hidden and wasted Oscar Isaac in this June’s X-Men: Apocalypse: An old evil being woken up after millennia of sleep, intent again on cleansing and ruling a barren earth.

Their similarities point to the great problem with superhero movies now that they have become mass-produced and mere entries to be followed by sequels already planned out, announced, and in production. For the biggest franchises, there can be no smaller stakes than the absolute annihilation of the planet; it happened in Apocalypse, Batman v Superman, The Avengers: Age Of Ultron and nearly every other flagship, tentpole superhero movie over the last few years. Exceptions like Deadpool and Ant-Man were small enough that they could focus on more personal stories, and by and large, their villains were way more engaging.

This is not a new criticism; Damon Lindelof gave a great interview on the subject three years ago. “Once you spend more than $100 million on a movie, you have to save the world,” the Lost co-creator and genre vet said. “And when you start there, and basically say, I have to construct a MacGuffin based on if they shut off this, or they close this portal, or they deactivate this bomb, or they come up with this cure, it will save the world—you are very limited in terms of how you execute that.”

Without knowing it, he was correctly predicting the third acts of both Apocalypse and Suicide Squad, which simply come down to heroes battling with a really angry entity to close a portal of destruction.

The reality is that the antagonist is almost besides the point now, because we know the good guys — or “good,” in this case — are going to win, and go on to fight and defeat some other half-explained baddie in the sequel (which we will consume piecemeal over the next few years through casting updates and trailers, until it is old news by the time it actually hits theaters). But it becomes harder and harder to care about the exploits of heroes if all they do is fight faceless evil, which is literally the case in Suicide Squad.