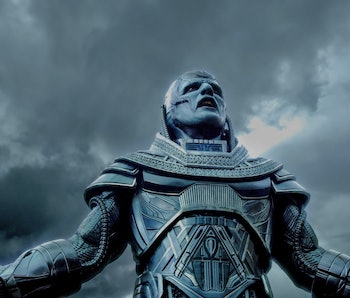 Never mind the comics, and never mind the falsely epic Biblical illusions. The titular Apocalypse in X-Men: Apocalypse from Bryan Singer is straight up the most boring villain yet in 20th Century Fox’s most convoluted movie series, which have been rendered royally FUBAR by its own nonsensical continuity. Is it too late for Marvel Studios to take its mutants back?

X-Men: Apocalypse isn’t a terrible movie. It’s fairly solid and actually funny (Quicksilver does it once again), but it also feels rote and by the numbers. It’s upsetting that a movie promising the end of days just delivers a marginally bad day for its characters. Captain America: Civil War actually changed the Marvel Universe, and those changes that will be reflected in Infinity War. But Apocalypse has only a big, bluish-purple hurdle in Oscar Isaac’s bad guy, which the X-Men easily leap over. It’s too much to ask a multi-million movie studio to dare end a franchise in 2016, but it sure would have been nice if the stakes felt dire at all.

The weakest component of Apocalypse is Apocalypse himself, the first mutant history’s mythologists perpetuated into a god. He’s played earnestly by Isaac, a stellar actor enjoying prominence since 2013’s Inside Llewyn Davis through A Most Violent Year, Ex Machina and the motherlode of sci-fi, Star Wars: The Force Awakens. Isaac as the X-Men’s biggest villain seemed like a win because he’s a reliable choice. But reliable wasn’t what was needed for Apocalypse. Isaac’s ambition with the character ends up hollow and, much like the rest of the movie, not particularly memorable.

But never mind Isaac; he did the best he could with the material. The real fault is in the character choice itself. Apocalypse is a talky force of nature, delivering long speeches about nothing while raining down empty CGI destruction. Apocalypse lacks personality — I’m not saying the guy should make jokes, but anything would have been more heartily welcomed than the vast, empty-eyed blowhard that cavorted around on screen.

His powerset also suffers from the “Superman problem” which real Superman doesn’t actually suffer from. Being a “living god” among men, Apocalypse isn’t immortal; in the film’s opening it’s established that Apocalypse needs new hosts, and that he was merely lucky to find a mutant with regenerative healing. But when he’s alive, he’s got SUPER levitation, SUPER lasers, and SUPER 3D printing. Badass? Also, dude, what was up with destroying Auschwitz?

Yes, Apocalypse is kind of meant to be overpowered, given his name and position as a quasi-god. But that shouldn’t stop filmmakers from pursuing the most interesting interpretation, and it sucks their interpretation means nothing. I almost never take issue with superheroes being immortal in movies; I was fully invested in Civil War, not because death loomed large (it didn’t), but because I was worried who these characters would change into. Death wasn’t the point of Civil War, but it’s supposed to be in X-Men: Apocalypse. Sadly, Fox’s depiction of death is just a big, droning noise. It’s a relief to walk away.