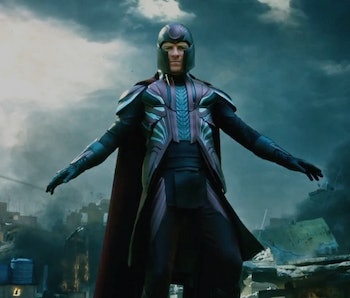 X-Men: Apocalypse carries the time-hopping franchise ably into the ‘80s, injecting new versions of favorite characters and regrettable hair choices into the ongoing Marvel mutant saga. But — and this is the case with most superhero franchise films — the movie suffers from its inflated stakes; yet again, the good guys have to take down a bad guy who wants nothing less than global destruction and/or enslavement.

Most superhero and sci-fi films made today involve mass killings of fictional citizens. Civil War and Batman v Superman even tried to make its superhuman protagonists grapple with the gargantuan number of casualties in previous films, but Apocalypse stands alone in its flippant disregard for actual human tragedy.

In Apocalypse, Oscar Isaac plays the title baddie, a gigantic blue mutant monster who awakes from a 5,000 year slumber to find a strange modern earth filled with infidels and sinners who refuse to bow down to him and his deranged proclamations. This leaves him very pissed off, and vowing to cleanse the earth and start anew with only the strongest humans surviving. To do so, he needs to recruit four fellow mutants — the horsemen to his Apocalypse — and get them to help him with his evil scheme.

One of his recruits is Magneto, that permanently conflicted master of metal played, for the third time, by Michael Fassbender. Since the events of the previous film, Days of Future Past, Magneto has been in hiding, toiling in obscurity as a factory worker in communist Poland. He’s got a wife and daughter, so his rage has been tempered some by newfound domesticity. When Apocalypse comes knocking, that simple life has been disrupted, and Magneto’s newfound rage is a prime target for exploitation.

He’s a man filled with a lifetime’s worth of rage, too, and it’s hard to blame him for his anger at the world. Magneto is a member of two oppressed minorities: He’s both a mutant, and a Jew who survived the Holocaust. The latter is a crucial part of his origin story and identity, and Apocalypse takes advantage of it to appeal to Magneto’s darker side. His stay in Auschwitz has been highlighted by director Bryan Singer before, in the opening scene of the first X-Men film, way back in 2000, but never in such a crass way as in Apocalypse.

In a crucial turning point, Apocalypse takes Magneto to Auschwitz, the infamous concentration camp where he spent years suffering as a small child. And in a play to empower him, Apocalypse helps him blow the place to smithereens, detonating the horrid barracks and chambers in the death camps.

It’s a shocking and deeply uncomfortable moment, even though the destruction was all digital; this is a movie that is filled with green screen catastrophes. It’s clear enough that Singer and screenwriter Simon Kinberg intended to create an image that could free Magneto from his tragic past, but detonating a place where some of the worst atrocities of the 20th century took place, in a comic book movie no less, feels wildly unnecessary.

It’s one thing when millions of people are killed in the abstract, in big CGI explosions; we’ve gotten used to that spectacle, for the most part, even if it has started to impact big screen storylines (in Batman v Superman and Captain America: Civil War in particular). Manufactured mass death is a given now, raising the stakes enough for the summoning of superheroes to be required. It’s much different, and more viscerally upsetting, when a very real tragedy is exploited as a plot point to aid a big blue demon in a corporate production that could have gone a million other routes to make the same point. Kick a Hitler doll, steal some Nazi gold, fake a silly mustache and dance around. They all serve the same purpose, and come with a lot less baggage and bravado.

We’ve grown accustomed to superhero movies creating fictional holocausts; it’s when they start to mess with the real thing that their sense of self-importance and real-world impact goes too far.