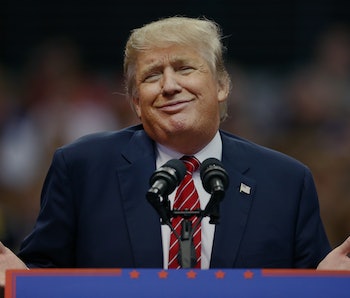 On Thursday, the New York Times published the transcript of an interview Donald Trump granted to David E. Sanger and Maggie Haberman. The interview is expansive, but one exchange stands out in its absurdity: when Sanger asks Trump about cyberwarfare. Here’s Trump: “I am a fan of the future, and cyber is the future.” From the interview, though, it’s not clear that Trump knows what the future has in store. Nor is it clear that he knows anything about cybersecurity.

If, say, Russia attacked one such country, would President Trump come to their aid? Trump says it’s conditional: if those nations were to pay their apparent debts, then he, as president, would come to their aid. Sanger wants to know how much incursion Trump would tolerate.

SANGER: You’ve seen several of those countries come under cyberattack, things that are short of war, clearly appear to be coming from Russia.

Sanger is not asking Trump a question, but making a point. Russia, like other age-old U.S. adversaries, engages in covert cyberwarfare. Russia targets select NATO nations. The implied question: Would a debilitating Russian cyberattack on a NATO ally warrant U.S. intervention?

It sounds a bit juvenile. “Well, we’re under cyberattack.” But it’s true, and it’s par for the Trump course, so Sanger rolls with it.

SANGER: We’re under regular cyberattack. Would you use cyberweapons before you used military force?

In 2016, this question demands a thoughtful response, if not answer. Back in May, cybersecurity expert Mike McNerney told Inverse about the pitiable state of U.S. cyberdefense and the potentially devastating effects an attack could have. “There’s a distinction between the justification for the use of force — whether it’s in cyberspace, or whether it’s on land, sea, or air — and the political decision to go to war, or to exercise that force,” McNerney elucidated. Later, McNerney said that the U.S. has “made it pretty clear” that it would take a significant cyberattack as justification for full-bore retaliation.

Given that such an event is at least plausible, and that our nation’s response would affect citizens’ safety, a presidential candidate should know how to respond. The sitting president at least had a plan (which was codenamed “Nitro Zeus,” so it must be good). Trump, however, does not.

TRUMP: Cyber is absolutely a thing of the future and the present.

[TRUMP:] Look, we’re under cyberattack, forget about them. And we don’t even know where it’s coming from.

Sanger had already forgotten about this “them.” Trump, it seems, does not care to discuss actual foreign policy; nor does he know a lick about the technologies and capabilities in question. Trump, perhaps, is referring to his own experiences: he’s a regular target for Anonymous, and the internet, in general, probably frightens the likely-weaved man. Plus, he’s trying to woo antagonistic Silicon Valley executives as best he knows how, which is to say not at all.

TRUMP: Because we’re obsolete. Right now, Russia and China in particular and other places.

Indeed: the experts, including John McAfee, agree: Russia and China have superior cyberwarfare capabilities. But listing superior nations and vaguely acknowledging our own country’s inadequacy does little to comfort worried souls.

“There is a cyberwar looming on the horizon, which will be many times more devastating than any imaginable nuclear war,” McAfee told Inverse. “And we have two presidential candidates, in a major party, acting like children.”

SANGER: Would you support the United States’ not only developing as we are but fielding cyberweapons as an alternative?

Trump seizes his opportunity to put the final nail in this topic’s coffin.

TRUMP: Yes. I am a fan of the future, and cyber is the future.