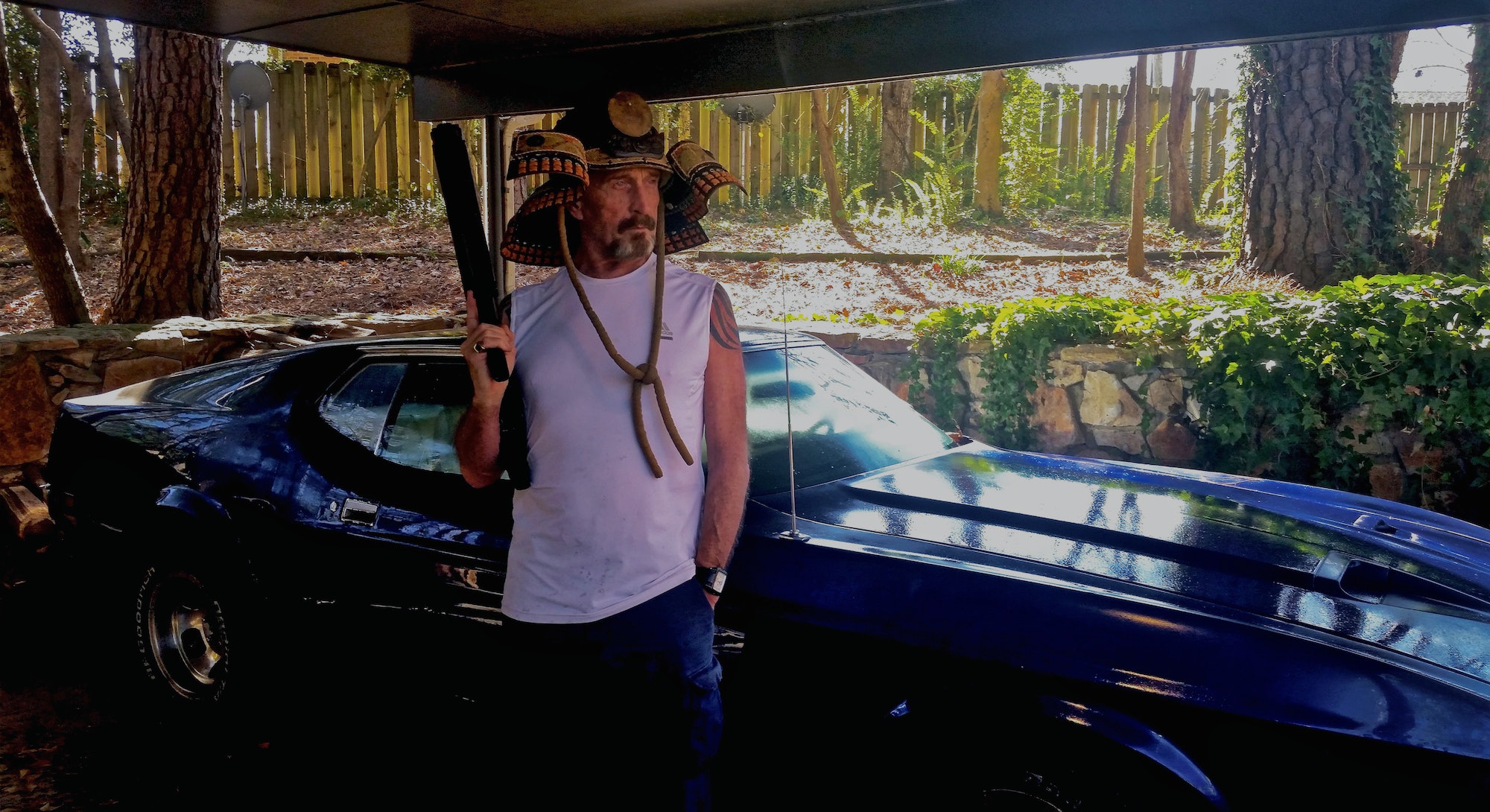 When I called John McAfee, the 70-year-old cybersecurity magnate and presidential candidate, he was in a truck, in the pouring rain, on his way to a Walmart in Memphis. His CNN interview had been delayed, so he had an afternoon to himself.

McAfee’s name is familiar because of his eponymous line of digital security products, the best-known of which is the McAfee antivirus software that was ubiquitous on desktop computers in the ‘90s and 2000s. He resigned from the company that bears his name in 1994 and sold his stake in it a few years later.

His days, now, are mixed bags: some “very rare” days, he says, are nothing but peace and quiet, while others involve as many as 16 interviews. I told him that was impressive, to which he replied: “At my age, it feels impressive.” This day, he was fighting off a cold, replete with extreme coughs, but was going on national television later that night to debate a former FBI agent.

McAfee seems as if he’d be able to speak with passion and conviction about the cracks in the sidewalk. But when it comes to America and its security, he’s incendiary: He’s adamant that the United States government is, by and large, a “completely dysfunctional bureaucracy.”

Some are inclined to believe that McAfee is a lunatic, that he was involved in a murder, and that he’s addicted to drugs. Those same people may be inclined to call his Libertarian Party–presidential run a stunt, an aging man’s last-ditch effort to recapture some of the fame he once enjoyed.

But others look at McAfee and see something different: someone who has little left to lose and not much to gain (aside from spurring a civilly-disobedient hacker uprising); someone dedicated to spreading a message; someone willing to look either crazy stupid or stupid crazy spreading a message.

What’s your current relationship with the United States like? Feel free to describe it as if it were an actual significant other.

Well, we were in love for the first 30 years of my life. I grew up during Eisenhower’s presidency, and, while he was not the best president — and while the ‘50s had its drawbacks, I have to admit — it was, nevertheless, a time of infinite hope. There were racial inequities, and all kinds of other problems, that have been solved or are being solved throughout time. But it was a government that actually served the American people.

Then we reached a stage of disillusionment, and now it feels like we’re outright enemies. When I go through TSA, they make me take off my shoes and my belt, put my hands in the air; they scrutinize my belongings and tell me that they’re protecting me. But, quite frankly, I’ve been in prison for a short while, and it felt, to me, like I was going into prison. And that I was, in fact, the enemy. So, if that’s what my heart tells me, then I must be the enemy.

Are you trying to change that relationship by running for president?

Absolutely. Absolutely. If you look at what’s happening … I mean, in all seriousness: Have you watched the Republican debates?

I let myself sit through one.

I force myself to watch. The last time I watched, [Marco Rubio] and Donald Trump were pointing fingers at each other about how they applied their makeup prior to going on camera. That’s kindergarten stuff. In a country where we have serious problems, not least of which is: There is a cyberwar looming on the horizon, which will be many times more devastating than any imaginable nuclear war. And we have two presidential candidates, in a major party, acting like children.

That scares me, more than anything else. It should make me angry, but it doesn’t: it frightens me. It makes me afraid for my children, my family, my way of life — and yours. Something has to bring us back to sanity. I may not be the most ‘sane’ person, in terms of looking at my life, but I feel compassion, and I try to use my intellect in the best way possible. I don’t see anybody else doing that.

If you were in charge, what would you do to change cybersecurity in the United States?

I would find other jobs for every cybersecurity specialist in the government, and here’s why: Bureaucracy sets a way of thinking. And no one in the U.S. government ever gets fired. If you are incompetent, you get promoted. To take anyone from within that bureaucracy and hope that they will somehow get back to a state of normalcy, and be productive, is just a hopeless thought.

We have to hire the best hackers on the planet. If it were me, I would set up booths at DEF CON, and HackMiami, and every single hacker community and meeting group in America. I don’t care what they look like: I don’t care if they have mohawks, or tattooed heads. We have to understand that this is our only hope. This group of people. Fifty to sixty thousand of the world’s best hackers are here in America. They’re just not being utilized.

You might even say they’re being pushed to the side.

Yes, they are. They’re being marginalized and demonized. That has to change.

Where do you place the responsibility burden when it comes to personal and national security?

I believe, sir, that the purpose — the prime purpose — of government has to be national defense. Otherwise, government has no guarantee of stability and continuance. Think about it. You cannot govern if you do not exist. Therefore, national defense has to be our number one priority. And we’re still building nukes, and battleships, and airplanes that are invisible. Who cares? National defense is defending our borders from foreign invasion, and foreign incursions of every kind. Not running around spying on other people.

Would you also say that politicians are obligated to uphold citizen privacy?

Here’s what the government does not understand: Privacy is one of the major glues that hold this society together. If everybody knew everything about everyone else — keep in mind, we are imperfect creatures, filled with greed and mistrust and judgment, with all kinds of frailties — if everyone knew everything about everybody else, there would be chaos. Beginning with a rash of spousal shootings. It is not the government’s job to invade our privacy; it is absolutely its job to protect our privacy.

And in order to do so, would you say that our politicians need to understand our technologies?

How much should we expect a citizen to take preventative action on his or her own behalf?

Right now, we have to do it all ourselves. Our entire government is disposed to invade our most intimate secrets. So, yes: We have to resist. I don’t care if it’s civil disobedience. Whatever it takes. It is on us, now. But it shouldn’t be on us. We have the natural right to privacy: It says so in the Constitution, and it is part of our human nature. It is part of being human.

So right now we have to fight. But we shouldn’t have to.

Would you agree with what seems to be a prevailing opinion, that hackers have done little more than act as pests, but never accomplishing anything substantial?

It’s because they didn’t choose to accomplish anything substantial. You have to believe me: Hackers have far more power than you can possibly imagine. Thank God most of them also have a conscience. And they also have a group of people that they work with, or know, who they have to keep respectable with. So, there are limits to what you’re allowed to do. But I promise you: If we piss off that group of hackers too much, they’re gonna come down, and come down hard.

Could you articulate a vision of how a group of hackers might effect a change?

If we could get them all to stand in line, and march in the same direction, that would do it. But I don’t know how to do that. I mean, these are the most individualistic people on the planet. If they see a line, they avoid it. Unlike the British: If the British have something important to do, and they pass a line, they have to stand in it. These hackers: No. They’re not going to follow anybody. They are independent, individualistic, and they march to their own drum. But yes, if they all banded together — and you can band together independent people like this if enough bad things happen. And a lot of bad things are happening now.

Let’s say they do band together. In specific terms, what do you think such an attack would look like? So, —

No, no. I’m not talking about an attack. Absolutely not.

I’m not talking about a cyberattack. I’m talking about a group of hackers all speaking with one voice. They’re all articulate people. I’m out here, and I’m talking to, you know, the world at large — I’m considered a madman. Why? I’m out here by myself. I’m talking to this FBI guy, Rogers, who is representative of one of the largest law enforcement agencies in the country. I’m a little bit outnumbered, here. I still talk, I still hold my own, and I intend to flatten this guy. However: If there were 50,000 of us all saying the same thing, believe me: Somebody would listen.

You know, I’m sorry. I am for civil disobedience. I am not for forceful … anything. Because, really: Violence begets violence. Force begets force. Anger begets anger.

But instruction can change a society.

Interview has been edited for brevity.