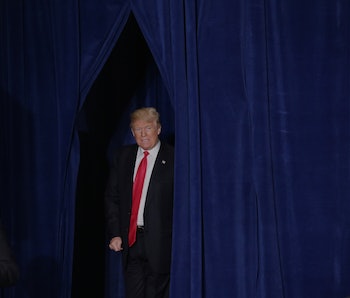 Donald Trump gave his second official foreign policy speech today and, after keeping the crowd waiting for about 30 minutes, Trump spoke for around 40 minutes. During those 40 minutes, he mentioned technology precisely once.

“We need to think smarter about areas where our technological superiority — and nobody comes close — gives us an edge,” Trump began, and ended about 10 seconds later.

The Center for the National Interest organized the Washington, D.C. event, during which Trump’s general demeanor resembled one giving a pep talk to oneself in the mirror. I can do this, one says: I was great once — I just need to be great once again! No one respects me anymore, but I just need to become strong. Et cetera.

And that pep talk was effectively the gist of Trump’s message. It was his slogan — “Make America Great Again” — in speech form. The United States needs a foreign policy, he said, that “replaces randomness with purpose, ideology with strategy, and chaos with peace.” Trump said that he’d place “American interests and security above all else,” and these interests will form the “foundation of every single decision that I make. America first will be the major and overriding theme of my administration.”

Trump eventually got around to explaining that (but not exactly how) he would eradicate ISIS and rebuild our military. (“They’re going to be gone. ISIS will be gone if i’m elected president. And they’ll be gone quickly. They’ll be gone very, very quickly.”) Immediately following his tirade about strengthening the military, he brought up technology, speaking for exactly 15 seconds.

Here’s the rest of Trump’s thoughts on the matter:

We need to think smarter about areas where our technological superiority — and nobody comes close — gives us an edge. This includes 3D printing, artificial intelligence, and cyberwarfare.

Were you expecting more? A politician’s foreign policy, as “a government’s strategy in dealing with other nations,” ought to include technology — especially in the world as we know it today. Just the use and threat of drones and government-sponsored hackers, respectively, make technology central to both a nation’s international relations and security.

Regardless, that’s the extent of what Trump said. Still, let’s take you through that list.

It’s not altogether clear how Trump assumes that 3D printing can soon or currently does “give us an edge.” 3D printing is overhyped: for the foreseeable future, it’s a neat way to make trinkets.

Maybe Trump is more interested in other applications, though. If we’re understanding Trump to be making a logical jump from military to technology, we’re assuming that he believes there are valuable military applications for 3D printing. While you can 3D-print a gun, it may not be military-grade. (If we’re not assuming that he intended to make that logical jump, then the comment becomes a non sequitur.)

Trump may actually be on base, here. The United States — home to Facebook and Google, for starters — may indeed hold the title for current A.I. systems. That status is by no means guaranteed to last, but we can reasonably toot those horns if we so desire. A.I. is enormously useful for an overwhelming number of fields — from improving social networks to helping blind people see. Again, though, taking what he means as a tie-in to his military vision, we’re left to imagine how A.I. can legitimately be a boon to military domination.

The United States in no way can be said to be at the top of the cyberwarfare pyramid. Government agencies are routinely hacked. Another presidential candidate warns that — due to our unpreparedness — there is a “cyberwar looming on the horizon,” one that will cripple our nation. Trump’s claim that America is ahead in this field is as laughable as the state of U.S. cybersecurity.

Here’s the full speech. Press play to cut to the brief tech comments.