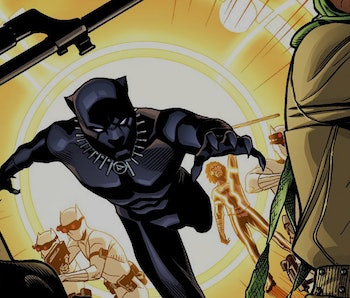 It’s been a great year to be a Black Panther fan. From a kick-ass movie debut in Captain America: Civil War to a thus-far amazing series from Ta-Nehisi Coates, fans of the Wakandan prince have enjoyed so much good stuff with their Marvel hero in the spotlight. Now, in the ongoing Black Panther written by Coates and drawn by Brian Stelfreeze, Eisner-winning artist Chris Sprouse replaces a departing Stelfreeze beginning with issue #5 coming in August.

“I want to do my best with the world and characters [Brian Stelfreeze] designed,” Sprouse told Marvel.com. “There’s also the added pressure of turning out artwork good enough that no fans will miss Brian too much while he’s away.”

Coates and Stelfreeze was a dynamic duo that rose Marvel’s Black Panther to a top spot in the comic sales charts. But with issue #5, Stelfreeze is taking a leave of absence scheduled to go up to at least issue #7, which Coates recently tweeted a preview that credits Sprouse as artist. Laura Martin is staying on as colorist, however, which explains why there’s only a vague difference in the aesthetic despite Stelfreeze and Sprouse’s differing pencil work.

Marvel’s Black Panther with Chris Sprouse on board as artist begins with issue #5 releasing this August.