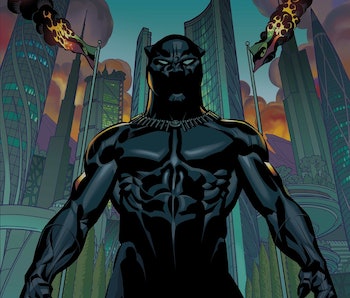 Unmasked and at a loss, T’challa, King of Wakanda and bearer of the warrior title Damisa-Sarki, or The Panther, ponders his next move. He just saw a revolt by his people that required violence to quell. His step-mother and elder advisor, Ramonda, warns him: “You are not a soldier. You are a king. And it is not enough to be the sword, you must be the intelligence behind it.”

Thus is the conflict driving Ta-Nehisi Coates’s Black Panther forward. The much-anticipated Marvel comic book debuts this week sporting vivid panels by Brian Stelfreeze and a heavy script from award-winning author/journalist Ta-Nehisi Coates. A celebrated intellectual and journalist who has become a leading voice on black America (he wrote “The Case for Reparations” in 2014), Coates’s hiring by Marvel to pen a new series starring mainstream’s first black superhero, Black Panther, seemed too good to be true. Well it is true, and Black Panther is good, even great, but does suffer at times from his lack of experience in visual storytelling. Coates’s reliance on lyricism makes Black Panther, at least in its premiere issue, heady and heavy, a hard read that is unlike what Marvel has in its current pulls.

That is not to say Black Panther isn’t well worth reading. A lifelong fanboy who shouts out Brian Michael Bendis and Justice League Unlimited in blogs for The Atlantic, Coates revealed in interviews his Black Panther — his first ever attempt at comic book — will explore tensions between kingdom and king, between an scientifically-advanced African nation never colonized and the sobering epiphany it is still governed by a monarchy.

Following Marvel’s universe-shaking Secret Wars, T’challa returns to a Wakanda in turmoil with a mysterious terrorist group “The People” taking advantage. Wakanda has endured hardships in recent years, from Namor’s flooding (in Jonathan Hickman’s New Avengers) to the death of Queen Shuri, T’challa’s sister, who was killed by Thanos’s armies. Wakanda was once a proud nation, but after suffering Atlantean acts of war and intergalactic invasions, what good is Black Panther? As T’challa tries to maintain control, two Midnight Angels — an elite group of woman warriors who guard Wakandan kings — begin their own rebellion.

Coates’s Black Panther is a totally different, totally refreshing story compared to Marvel’s other books, even ones of different genres like sci-fi (Captain Marvel, Guardians of the Galaxy), westerns, (Red Wolf) and David Lynchian tragedies (Tom King’s current run on Vision). Beyond Black Panther himself, Coates brilliantly defines his supporting characters like Ramonda and the two Angels, Ayo and Aneke, while changing T’challa into a desperate brooder. We’re introduced to T’challa as a warrior king reluctant to wage war on his kingdom, but without spoiling the ending of issue #1 we glimpse a dark, tragic turn for the worse.

The book does rely on Coates’s incredible writing, which separates it from most current mainstream comics, and makes it a more intense read. Comics, at least the best ones, let images talk while words support. Stelfreeze’s art is spectacular, but most of Black Panther is told in words — heavy poetic words that don’t always compliment Stelfreeze’s panels. Plus, being a first issue, Coates sort of relies on comics knowledge to fully get the nuances of his story. The very first page is a montage of T’challa’s father T’Chaka, Namor, and his sister Shuri shaming him, and I doubt first-time comics readers — given the audience and attention Coates brings, that’s likely — will understand the depths to, which is a bad way to start a series as complex Coates hopes his book to be.

But considering the author’s inexperience it is excusable. It’s a learning curve Coates himself admitted to struggling with and I look forward to seeing how Coates overcomes and improves.

In what is bound to be the year of Black Panther — the character will make his cinematic debut played by Chadwick Boseman in Captain America: Civil War this May — there is no groundbreaking writer better suited for the equally groundbreaking superhero. This is a new start for Black Panther as much as it is for its author.