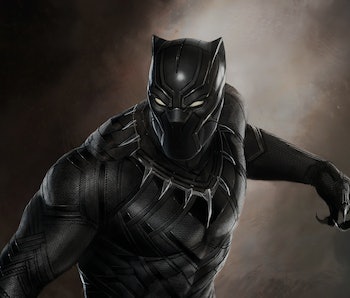 Acclaimed journalist, author, and National Book Award winner Ta-Nehisi Coates is writing a comic book. Not just any comic, though, but Marvel’s Black Panther. What’s that book gonna look like?

Widely recognized as mainstream’s first black superhero, the Black Panther is the warrior prince of Wakanda, a technologically advanced and flourishing African nation in the Marvel universe. The character will make his feature film debut in next year’s Captain America: Civil War, so when Coates’ first issue hits shelves next spring will be as good a time as any to read some funny pages.

Renowned for his insightful essays on black America that range from slavery and Jim Crow reparations to mass incarceration to black conservatism, Coates is also a diehard nerd who has never postured otherwise. Picking apart his frequent shout outs to his favorite books, writers, and other geek hallmarks could provide a clue as to what to expect on his run of Black Panther.

Coates has been a vocal Fraction fan, recently spending a five-hour train ride “on a Matt Fraction binge.” While reading Fraction’s run on The Invincible Iron Man during the Dark Reign arc, Coates recall a particularly poignant moment.

In writing for The Atlantic:

“The best part about all of this isn’t watching Stark alternate running from enemies with deleting his mind, though that’s pretty cool. It isn’t the diminishing renditions of Iron Man armor he conceives, finishing with the old original model that looks like it was assembled from oil barrels and kitchen appliances. No, the best part of this adventure is Pepper Potts, Stark’s assistant, his sometimes-love interest, and the eventual head of Stark Enterprises … in Fraction’s rendition she has great texture and range. There’s a scene where she has to rescue two other high-powered agents—Maria Hill and Black Widow—and for several panes the three discuss what it means that Hill and Widow are being rescued by Stark’s ‘secretary.’”

An outspoken feminist, Coates’ argument on Hollywood unable to match the bold diversity of comics was clear when he cited the casting of Alexandra Shipp as Storm as a missed opportunity. Why couldn’t Hollywood cast a Kenyan woman as the Kenyan weather mutant? “In this world, the one where we can accept Nina Simone’s music but not her face, it matters,” Coates writes.

In another example citing Potts’ awesomeness in Invincible Iron Man, Coates said in an interview with Vulture:

“[T]here’s this great fight scene between Pepper Potts and a female villain. The comic ends, and in the next issue you see the supervillain come on, and she’s like, ‘I killed her with my bare hands.’ And you don’t figure out until maybe an issue or two later that actually Pepper Potts dealt with the woman and had assumed her guise. It’s a typical twist that you see in movies all the time these days. He was dealing with the problem of the twist. How do you get a twist in there? The great twist is the one that you didn’t even know was there. [Fraction] pulled that off so, so well. In fact, I have to go back and read it a few times myself.”

Spoiler alert, but Joss Whedon likes to kill his characters. During his run on Astonishing X-Men, Whedon offed the “proto-Buffy”. Coates had an issue to that.

“I read Joss Whedon’s run on Astonishing X-Men and thought it was pretty awesome. The Hellfire arc was thoroughly enjoyable. But then they went and ‘killed’ Kitty Pryde. I’m not against death—but death seems to happen in comic books (especially to women) often because writers can’t think of anything else to do.”

With all due respect to Whedon, if there’s one thing Coates isn’t going to do it’s probably kill women. (RIP Penny, and Winifred, and Buffy’s mom.)

Speaking to Vulture, Coates had nothing but praise for the MCU interpretation of The Winter Soldier in an interview for [Vulture](http://www.vulture.com/2015/04/ta-nehisi-coates-superhero-comics.html). The film, directed by Joseph and Anthony Russo, took heavy cues from Ed Brubaker’s arc of the same name.

“First of all, it’s just great source material. I wasn’t the biggest Captain America fan, but increasingly I see him as a great character. Winter Soldier really got into what it meant to actually represent America. There’s a way to do that in which it’s just this sort of light-skinned guy who runs around with a flag, you know? But there’s also opportunity for intellectual conversations.”

In both iterations of Winter Soldier, Captain America feels far gone from his World War II roots. He thinks of himself as a propaganda weapon more than an idealistic symbol of hope he once was. The enemies the U.S. faces are less obvious, more insidious. There’s a post-9/11 paranoia of the Brubaker comics and an overwhelming NSA/surveillance scare that haunts the Russo film. While the fictional nation of Wakanda doesn’t have the baggage that America does, the weight of expectations that could wear down T’Challa as the symbol of hope for his Wakanda aren’t unlike that of Marvel’s boy scout.

One of the most celebrated stories in Spider-Man lore was a showdown with Kraven, a Russian immigrant who grew to become an aristocratic big game hunter that sought the biggest game of all: Spider-Man. The central themes to Kraven’s Last Hunt that deal with the will to live, and freedom to die, took a young Coates’ imagination by storm.

“I read this when I was like ten or eleven, and what was amazing to me was how little action there was. It was the first time that I’d encountered a comic book as a kind of psychological thriller. Again, great for stoking the imagination. I followed this through the books, and was just on pins and needles wondering what would happen next.”

All good stories inspire suspense and a desire to turn the page and see what’s next. But could themes resonant in Kraven’s Last Hunt make their way in Black Panther? More literally, I could see a hunter “hunting” Black Panther. Themes of colonialism and invasion would be heavy handed, but under Coates’ pen it could be so rich.

Despite his rigid allegiance to Marvel Comics, Coates has confessed a love for the DC animated TV shows. From 2001 until 2004, Justice League and its sequel series Justice League Unlimited aired on Cartoon Network. While it initially exhibited typical superhero adventures, they later went waaaay high-concept.

Episodes like “A Better Tomorrow” explored a totalitarian vision of the League, “Kids Stuff” which turned Superman, Batman, Wonder Woman, and Green Lantern into 10-year-old kids, and “The Greatest Story Never Told,” which followed D-string superhero Booster Gold on a time-traveling mishap that happens just out of sight from a previous adventure taken on by the League’s heaviest hitters.

In that same Vulture interview:

“That show was incredible. Totally underrated. I mean people talk about this era of great storytelling on TV, and Emily Nussbaum wrote this great piece about why Sex and the City never comes up in that conversation, and I think there’s a strong case for why don’t Justice League and Justice League Unlimited come up in that conversation either. It’s great TV. You could watch every episode of Batman: The Animated Series, every episode of Superman: The Animated Series, and it can hold the coherent universe together in a way that is much better than — I like The Avengers … but [the aforementioned shows are] much better than anything you’re going to see in film.”

High-concept fun to serious-toned questions on responsibility, identity, and most of all, teamwork, it’ll be fascinating to see what Coates has learned from Marvel rival DC’s most impressive animated endeavor.