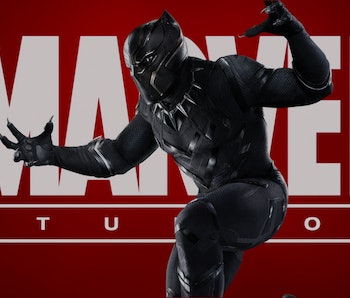 Since his debut in Fantastic Four #52 in 1966, Black Panther has held a place of royalty in the world of comic book fandom. And on May 6, the princely predator will leap from jumbo comics to the big screen for the first time in Captain America: Civil War, directed by Joe and Anthony Russo.

While Iron Man and Captain America fistfight over superhero oversight, Black Panther (played by 42 star Chadwick Boseman) pursues his own agenda amidst the MCU’s gnarliest battle royale. And after Civil War, not only will Black Panther be the breakout star, but his impact will be felt as Marvel’s Phase Three marches on.

Behind Black Panther’s mask is Prince T’Challa of Wakanda, the Marvel Universe’s most scientifically advanced nation, whose people were never subject to European colonization. Wakanda’s vast deposits of Vibranium, the precious metal from which Captain America’s shield and Ultron (James Spader’s baddie of 2015’s Avengers: Age of Ultron) were constructed, allowed Wakanda to flourish.

After Ultron’s devastation of Sokovia, Wakanda comes out of isolation in Civil War to support the Sokovia Accords, a multinational ruling to wrangle the Avengers as a federal force. That’s when the fighting happens.

His role gets much bigger, though, after a terrorist attack on the summit is blamed on Sebastian Stan’s Bucky, a.k.a. the Winter Soldier. That blast kills his father, the King of Wakanda, and T’Challa goes full predator and hunts him down, leading the reclusive African nation’s new leader to join the massive superhero battle against Captain America.

“He could really care less what Cap feels, what Tony feels,” Marvel Studios head Kevin Feige told USA Today. “He’s fresh eyes to their arguments and relationships (and) an equal with some of the power players, but has his own point of view about what’s going on.”

The Russos admitted they were anxious about getting T’Challa and Black Panther right during production. “Its his first time on screen. We put so much pressure on ourselves,” said Joe Russo to EW. “I think more pressure for that character alone than we did anything in the movie just because as a comic book fan I thought it was so important to get the interpretation of that character right.”

Much of the pressure was also felt by Boseman, who took on the duty of filling out Panther’s slick skin-tight suit and will do so again in T’Challa’s solo film, which will hit theaters in 2018. “I felt a constant anticipation of whats to come while doing this, which is a beautiful thing,” Boseman told USA Today. “You always know this is going to get better and better.”

Even in the crowded blockbuster that is Civil War, Boseman carves a unique, star-making identity for the heroic predator. With careful, smart direction by the Russos and Boseman’s exceptional performance as the masked dignitary, T’Challa brings immediate regal presence to every scene. It’s especially noticeable (and fun!) when he’s pitted against grounded heroes like Falcon, Cap, and even Paul Rudd’s Ant-Man.

“You could be having a great time with him at a party, and all of a sudden he disappears and no one knows where he is,” he said in the same USA Today interview. “It puts him in a position where he’s always going to be misunderstood by people. I love that aspect because it creates a dark side to him.”

Without spoiling much, Black Panther changes the MCU big-time once Civil War’s credits roll. You can already guess where things are headed in Wakanda, where Panther harbors an MCU VIP.

But his impact post-Civil War will be sudden, just as it was in 1966. The fluid Marvel Cinematic Universe could very well change to accommodate him; Ant-Man wasn’t planned for a sequel, and Spider-Man wasn’t supposed to be in this thing at all, but Ant-Man and the Wasp is coming and Marvel and Sony are gearing up for Spider-Man: Homecoming. It’s plausible Marvel goes all-in on Panther wherever they can squeeze him.

Fans have been excited to see Black Panther for a while now and his slick costume will be a massive hit with kids and toy collectors; heck, if you want a head start on Halloween you can buy a Black Panther costume right now. But it’s more than just “coolness” or even status-quo altering ripples that makes Black Panther important.

Talking to USA Today, Boseman explained the one thing that’s so cool about being a superhero: Playing a role model to kids. For Black Panther, the first superhero of color, it was simply “pretty dope.”

“When I got the movie, that was the first thing I thought about,” he said.

He’s a big deal, this feline fella. Outside comics, Black Panther is recognized as mainstream’s first black superhero, created by Stan Lee and Jack Kirby at the height of the Civil Rights movement. Since then the obsidian superhero has been an icon of wish-fulfillment representing underrepresented readers. “People ask, ‘Why is diversity in our superheroes important?’” said award-winning journalist and Black Panther writer Ta-Nehisi Coates to TIME. I’d turn that around and ask, ‘How does it reflect the real world to show just a bunch of white dudes?’”