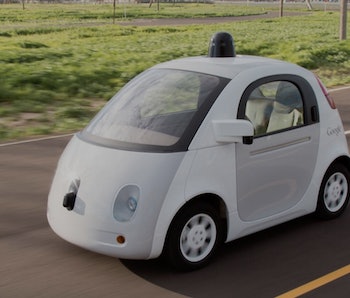 Depending on who you ask, autonomous cars will be ready for the public in four years, seven years, or 10 years. But one thing is clear: autonomous cars are coming — just as soon as companies gather enough data to make the technology work properly.

Which draws the question: How much data is enough data? The answer lies in how much risk you are willing to take.

Autonomous vehicles will need to drive hundreds of millions of miles, possibly even more, before companies can say the cars are statistically as safe as human drivers, senior RAND Institute researchers Susan Paddock and Nidhi Kalra argue.

Paddock and Kalra make their argument in an April report titled “Driving to Safety: How Many Miles of Driving Would It Take to Demonstrate Autonomous Vehicle Reliability.”

“It goes back to what’s important to people,” Paddock tells Inverse. “Do they want [autonomous cars] to be safer than human drivers? Comparable? Will that answer change over time?”

For an accurate picture of how safe autonomous technology is, it could take billions of miles of data. A bit of math from the report explains why:

Although the total number of crashes, injuries and fatalities from human drivers is high, the rate of these failures is low in comparison with the number of miles that people drive. Americans drive nearly 3 trillion miles every year, according to the Bureau of Transportation Statistics. In 2013, there were 2.3 million injuries reported, which is a failure rate of 77 injuries per 100 million miles driven. The related 32,719 fatalities correspond to a failure rate of about 1 fatality per 100 million miles driven.”

That is one perspective. But the average American only drives around 15,000 miles in a lifetime. Human experience is gained mile by mile, whereas each autonomous car from Google or Tesla has millions of miles of experience pre-programmed into it before it ever sees the road. Each car has lifetimes of experience that the overwhelming majority of people will never get.

Google has gathered some of the most valuable data on autonomous driving since the program started in 2009. The company has worked up from driving on highways, to driving on residential streets, to finally navigating congested urban areas.

Sure, there’s been a couple fender benders here and there, but it has slowly built its way closer to a finished product.

Chris Urmson, Google’s director of safety for its self-driving car project, explained the progression on the South by Southwest stage this year.

“We imagine we’re going to find places where the weather is good, where the roads are easy to drive, and we’ll start there,” Urmson said then. Using the data from the simple areas, Google can then move to more complex areas with confidence “because we’re going to understand how our cars drive.”

The company drives around 15,000 autonomous miles per week, and has racked up more than 1.7 million miles in full autonomous mode to date. It’s taught the cars how to honk patiently and how to handle roving cyclists. When the 100 Fiat Chrysler autonomous minivans go on the road for testing, data will be flowing in even faster.

But 1.7 million miles of autonomous data gathered on the road is a far cry from the 100 million miles Americans drive before a fatal crash happens. At this rate, it would take years for Google to get enough data. Which is why Tesla opted for a faster route.

Tesla’s test drivers are its customers. Autopilot, the most advanced autonomous system on the road today, is still in beta. That hasn’t kept drivers of 70,000 Autopilot-enabled Teslas from using it, though.

Sterling Anderson, Tesla’s director of Autopilot, said in May that it has gathered more than 100 million miles of data on autonomous driving and 780 million miles of data on human driving in the first 18 months Autopilot was available. The company is well on its way to getting autonomous data comparable to human driving data. The data needle will rise exponentially when there are a bunch of Model 3s on the streets.

There is a danger to using customers as test drivers, though — as the first fatal autonomous crash in May showed.

Using beta technology is like using experimental healthcare, Paddock says. People will test a new drug for a condition before there is enough data on it, and must understand the risks associated.

“With any sort of new technology, I think it’s important to think about how it should be used,” Paddock says. “It’s a beta product, so drivers need to understand that it’s experimental.”

Data without the fancy cars

Nearly every other major car manufacturer — from GM to Ford to Volvo — is also gathering autonomous data on a small scale.

There’s another way way to gather data though, and all it requires is a phone.

A start-up autonomous car company called Comma.ai is looking to build a $1,000 kit to retrofit cars into autonomy. The company, run by George Hotz, built a prototype in less than a year without a fancy fleet of cars using only 5,000 miles worth of data. Hotz told Inverse in June that he wants around 100,000 miles of data before releasing a product to the public at the end of this year, and he’s going to get it by crowdsourcing data from an app on people’s phones.

Uber gathers data on its drivers in a similar way. If phone data proves to be useful, Uber’s huge platform could gather a huge amount of data in a short time.

“How much uncertainty is the public willing to accept?”

Each company has a different method of gathering data.

Tesla is the closest to getting anywhere near the numbers that Paddock says is needed for a realistic comparison to the safety of human drivers, but it isn’t the safest method of collection. It will be a long time coming before Google ramps up to scale, and the same goes for Comma.ai — if the company can bridge the gap between messy phone data and more reliable full-car sensor data.

So how much data do companies need before autonomous cars hit the market? “It all depends,” Paddock says, “on how much uncertainty is the public willing to accept?”

Just remember: The cars already have more driving experience than you do.