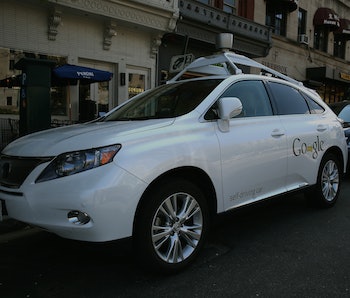 Ah, the kids grow up so fast — first they started driving themselves, and now they’re learning to talk. One of the biggest problems with electric cars (which we’ll probably all be driving soon) is that they don’t make any noise. Fortunately, Google is already on it. The software company released its May 2016 monthly report that examined how its adorable little autonomous Fiats will use their horns to alert other drivers (and maybe talk to each other!) on the road.

According to Google, every aspect of the car’s sound profile has been tailored to make it convenient and pleasant for passersby (which is mandated by Congress so sneaky hybrid or electric cars don’t run over people). The vehicle should emit a familiar hum which will increase and decrease as the car speeds up and slows down, so pedestrian and cyclists will be aware. But Google also put in some weird stuff too, searching around “for inspiration” in “ambient art sculptures” including orca sounds to make a car that had a “voice that matches our face.”

“We also wanted to insert a little personality and create a unique voice for our self-driving car,” the post said. “Neighbors often tell us our prototype vehicles look friendly and a little futuristic, and we hope we sound like it, too.”

But the big algorithm is teaching the little orcas to honk. Google says it wants its cars to “honk like a patient, seasoned driver,” only using the horn politely when it’s necessary, like when someone encroaches into their lane or behaves erratically. And because A.I.s are quickly becoming smarter than we are, Google hopes its cars will be able to psychoanalyze other drivers too, or at least “be able to predict how other drivers respond to a beep in different situations.”

Google is already collecting massive amounts of data from its self-driving car experiments, so it’s a safe bet that they know what they’re doing with the bleeps and bloops. It’s testing the honking algorithm by having human testers in the vehicles make a note of each time the car (which we’ll be calling orcas from here on out) beeps, and judging whether or not the honk was justified. As the system got better, Google says it taught the orcas to use “different types of honks depending on the situation.”

“If another vehicle is slowly reversing towards us, we might sound two short, quieter pips as a friendly heads up to let the driver know we’re behind,” the report said. “However, if there’s a situation that requires more urgency, we’ll use one loud sustained honk.”

And if the smart-honks and carefully-tailored orca-inspired sound profile doesn’t work out, we’ve got some other suggestions that Google is welcome to try.