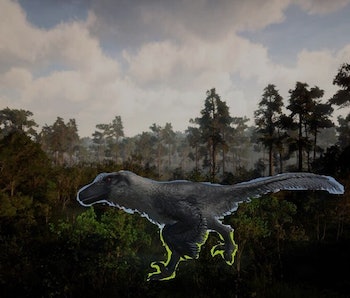 I have a confession: I haven’t jumped on the virtual reality bandwagon yet. Sure, having immersive experiences is great and all, but personally I’d rather play with a real dog than a digital pet. Sure, the technology has the potential to change the world for the better, but so long as capitalism rules, it’s guaranteed that investment will go mostly into neat toys for the privileged, not innovation for the benefit of humanity. I don’t think that is a profoundly cynical argument or a profound argument at all. This is just the way these things tend to go.

From my personal perspective, though, the real reason to view consumer VR skeptically is the vomit problem. When your movements in virtual reality and the real world are out of step, headsets induce an uncomfortable nausea. It’s like motion sickness’s cousin that moved to Menlo Park and got rich. This is particularly problematic for me because I only travel by motorized vehicle a couple times a week and therefore get motion sick quite quickly. If I had an Oculus within arm’s reach, I don’t think my hand would head that way.

However, I believe there is hope for me, and for others like me. A few months ago my partner and I were headed out to go camping down a winding, nauseating stretch of highway. A friend who we ran into at the grocery store on the way out of town gifted us a joint for the trip. I’ve never made a habit of marijuana smoking, but I thanked her for the present and put it away in the glove compartment. I figured we could pass it around at the campfire later.

But, about halfway through the drive, I started to feel unwell. I closed my eyes, desperate for relief. Then I thought of the joint. “Do you think weed would make me feel better, or worse?” I asked my partner. “Definitely better,” he said. “Weed is good for everything.” He reminded me that marijuana has proven particularly effective against nausea in chemotherapy patients. Worth a shot, right?

So I lit up and took two tokes, which is about my limit between a nice buzz and feeling uncomfortably high. It was shocking how well this worked. In a literal instant, the nausea evaporated. I was flooded with the joy of sudden relief.

This is why marijuana and VR are natural bedfellows and future amigos in awesomeness. Not only can weed make virtual reality less uncomfortable, it could also potentially make it more fun. For people who want to get the right amount of high, VR represents the opportunity to trip without tripping balls.

And if smoking weed is simply part of the culture around VR, it will chill the hype cycle and perhaps convince the producers of new experiences to create more universally appealing, less splashy entertainments. It’s very possible that there would be a lot of VR users like me interested in visiting other worlds and not terribly eager to play them.

Here’s the first place I want to visit in the THC-enhanced VR future: Hell Creek, circa 66 million BC. Saurian is a dinosaur video game that promises to transport players to a real point and time in Earth’s history. Your goal is to grow up and survive as a dinosaur in that world, from hatchling to adult. Thanks to a wildly successful Kickstarter campaign, the developers have promised to offer the game in virtual reality.

What’s so exciting to me about this game is that the world it creates is one that actually existed in the deep past. The team behind the game has made pains to make every aspect of the dinosaurs, other animals, and their environment as scientifically accurate as possible, given the evidence available. It’s a fantasy world, to be sure, but you get to fantasize about what life was really like in Earth’s deep past.

Do I absolutely need to run out and get VR equipment? No. I don’t feel that compulsion. Do I want to smoke a little weed and time travel? Absolutely. I don’t have to be sold on that.

More like this
Innovation
Sep. 21, 2022
Gaming tech could ease pain during surgery — here’s how
By Sofia Quaglia
Gaming
14 hours ago
6 best spooky games to play on Nintendo Switch Online ASAP
By Joseph Yaden
Gaming
13 hours ago
You need to play the most cerebral sci-fi RPG on Nintendo Switch ASAP
By Hayes Madsen
Related Tags
Share: