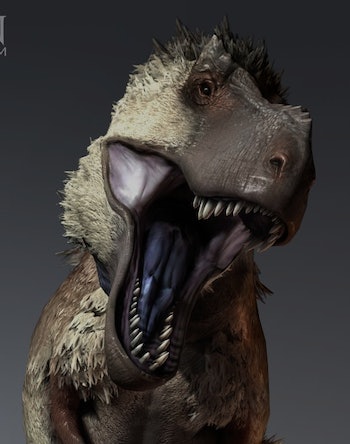 Plastic dinosaur toys — like the ones you rammed together as a kid — have never really been updated. There is no great dinosaur game, no franchise that allows children and adults to step into a realistic rendering of the Cretaceous world. But there will be. And soon. Saurian is coming and Turok: Dinosaur Hunter is about to get relegated to the dustheap thanks to a combination of clever engineering and smart science.

Saurian is a survival game in which you play as a dinosaur, and try to grow up and survive in a dinosaur’s world. What sets it apart is that all of the dinosaurs in this world actually existed in the same time and the same place, about 66-million years ago. Every aspect of the animals and their environment is designed based on the best scientific evidence available.

“What we’ve learned about dinosaurs in the 20 years since Jurassic Park came out is phenomenal — the amount of things that you can actually know, just looking at bones and fossils,” Nick Turinetti, the Saurian project lead, tells Inverse.

Turinetti is a long-time fan of dinosaurs. “When you’re young, dinosaurs are really cool because they are these real life monsters, or real life dragons. My parents were really awesome in fostering that love, because when I was a very young child, instead of having stories read to me, they would read general knowledge dinosaur books to me, to make me go to sleep. I can still remember correcting their pronunciation on dinosaur names.”

His interest was reinvigorated by late-night Wikipedia trawls and inspired by the flood of new scientific information about dinosaurs that has crashed over amateur paleontologists’ heads. His internet wandering became more purposeful and he eventually began connecting with communities of scientists, artists, and hobbyists. He’d wanted to make a dinosaur game since college and he was quickly realizing it might be not only possible, but critical to public discourse.

“When I was working at my job I’d actually doodle, or scribble out design ideas on the back of legal paper,” says Turinetti. He had been getting into games like Jurassic Park: Operation Genesis, Spore, and Jaws Unleashed, and imagined a game that borrowed elements from each to allow the player to really live life as a dinosaur.

With no background in video game development himself, he set out to get other dino/gaming enthusiasts on board with the idea. Now, the team counts more than a dozen contributors, who have all volunteered their time to bring this concept to life.

The setting he eventually settled on for the game — with some help from the dozen contributors to his team — is the Hell Creek Formation, located in what is now Montana, Wyoming, and the Dakotas. That area was once a flat floodplain, and its unique geography has made it one of the richest fossil treasure troves from the dinosaur era. The area is also incredibly well studied, and scientists know a great deal about the animals and plants that called Hell Creek home, as well as the climate and weather.

That part of the world was very different from what it is today. For one — it was a lot hotter — probably hotter than today’s Texas, on average. It was also a lot further north than today, thanks to tectonic movements. It existed on the globe about where today sits Churchill, Canada — a small northern town famed for regular visits by polar bears. So, although Hell Creek was quite tropical in temperature, it had the extreme light in summer time and extreme dark in winter that now characterizes the sub-Arctic.

“There were seasons,” says Turinetti. “You actually had fall colors, and leaves falling off of trees, and dinosaurs existing at the same time. It’s not always just this warm, permanently tropical, volcanoes erupting everywhere landscape. It’s very unique, and different than the world we know today.”

In terms of the ecology, Hell Creek was a bit like a mix between the rainforests of the Pacific Northwest, the dry pinelands of Georgia and Alabama, and the bayous of northern Florida, says Turinetti. Floods, storms, and wildfires were common.

It wasn’t just dinosaurs that made their home in Hell Creek — there were also ancient relatives of turtles, lizards, snakes, crocodiles, fish, and small mammals. But the dinosaurs, of course, were the kings of this castle. Some of the most famous dinosaurs lived there at that time, including the Tyrannosaurus rex and Triceratops.

And, yes, you will be able to play Saurian as a T. rex, though it might look a little different from what you imagine. Throw out your Jurassic Park fantasies — the best science available says the tyrannosaurs were covered at least partially in feathers and had lips covering their fearsome set of teeth.

Don’t like it? Unless you’ve got some serious evidence to back up your claim that they got it wrong, Turinetti and his team aren’t listening. Still, they’re open to the possibility that new data will one day make their beasts look dated. “I would wager right now that we haven’t gotten any of the animals 100 percent right at this stage, but they’re the best we can do based on the data available to us,” he says.

For the most part, the world at large seems stoked on the whole endeavor. The team launch a Kickstarter in late May to fund ongoing development, and blew past their basic goal of $55,000 in two days. After a while the project becomes like your baby, says Turinetti. “When you finally put that out there, there’s that wonder: Are people going to recognize this idea for what it is? Are they going to recognize just how much work has gone into this, how much care has been put into it? And to have that rewarded so quickly is a little overwhelming, to be honest.”

Now sitting at $168,000 with about a week left in the campaign, the team has met a number of stretch goals that will certainly make the game a whole lot more awesome. With the basic $55,000 target met, the team believes it can release an early version of the game for PC and Mac, with one playable dinosaur and most of the ecosystem features in place, by early 2017. The additional funds have unlocked new customizations and characters, weather events, and a multi-player mode.

Most awesome of all — the developers have committed to a post-impact survival scenario, where you live out what it would have been like for dinosaurs after the impact of the asteroid that wiped out nearly all of them 65 million years ago. In this apocalyptic environment, you will fight for survival, although ultimately death is certain.

If the campaign hits $205,000, the developers will work on virtual reality support for the game. At $300,000, they’ve promised a whole new environment, with new dinosaurs, based on the Two Medicine Formation of what is now Montana and Alberta.

Contributing to the Kickstarter offers the usual perks, like access to the game, or a copy of a guide book to the Hell Creek Formation that will combine concept art with scientific explanations for the video game design. You could also get this: A real dinosaur feather, courtesy of Gerry the emu (because birds are dinosaurs, duh!) Gerry is on the development team, working with animators to make sure the dinosaurs move like they are supposed to. That will make Saurian the first dinosaur-approved video game about dinosaurs. Take that, Jurassic Park.