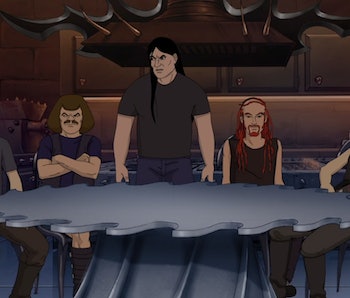 When Brendon Small, the creator of Adult Swim’s animated series Metalocalypse, announced the show wouldn’t return for a fifth season last year, fans were predictably distressed. And they’re trying to do something about it, even if the network is laughing at them.

Metalocalypse follows the adventures of death metal band Dethklok, a band so popular and rich that its fortune comprises the seventh largest economy in the world. An Illuminati-like coalition called The Tribunal monitors the band’s activity, attempting to thwart them at every turn, but the band’s gargantuan success continuously prevails. Since Small’s announcement, a petition to bring back the show for a fifth season has been circulating on the Internet. Today Adult Swim released a video of one of its contractors signing the petition, another middle finger to the fans rooting for its comeback.

Adult Swim recently published a note on their website that said the company would add its name to the petition if the company received at least 25 signatures by fax, a purposely minuscule number intended as a joke. Adult Swim live-streamed the fax machine as petitions poured in, a “pretend fax voting” stunt that one of the show’s director’s Jon Schnepp said was like a middle finger to everyone vying for its return. “Adult Swim is willing to add its signature to the Change.org petition to bring back Metalocalypse**,” the note on the site said. The asterisk took readers to a footnote that said, “Adult Swim’s endorsement of said petition — in no way whatsoever — will bring back Metalocalypse*,” a typical tongue-in-cheek move by the farcical Adult Swim.

In the new video on Adult Swim’s website, a contractor for Adult Swim named Lauren introduces herself and then proceeds to sign the petition with Adult Swim’s name, writing “we have received at least 25 signatures via fax” in the “I’m signing because…” box. Then she turns back to the camera and says, “Okay, I think it’s done—you’re welcome,” as if she has just completed a high-risk covert mission. It looks like she attempts to hold back some laughter as she assures the audience that the mission has been completed, rubbing the joke in the faces of the 94,045 people who have signed this petition.

When we interviewed Schnepp last week, he related one of his ideas for how the series should end, noting that Dethklok eventually spurs on the prophesied Metalocalypse, “watching everything die, until everything on Earth is dead.” Narcissistically bored with their fame, “all of them walk into the worlds largest volcano. Nathan steps into a tyrannosaurus’ mouth, and they both walk into the volcano. The end.” Sounds like a pretty typical ending for the show, but we probably won’t get to see it come to fruition — even as more and more people join the movement to revive the series.