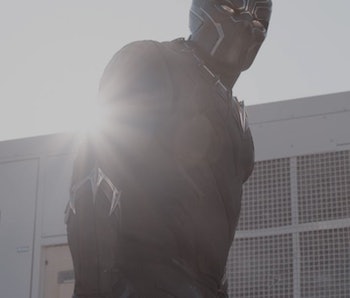 As Marvel’s next huge film event approaches, fans have been scanning each frame in the film’s trailers, looking for glimpses of Black Panther and the third cinematic version of Spidey we’ve had in a decade. Twitter, specifically, has fallen in love with T’Challa, the first African American Avenger, and fans of the huge Spider-verse in Marvel comics are excited to see the cinematic universe acquainted with Peter Parker.

Though the film’s drama will undoubtedly involve most of the familiar Avengers and JV Avengers we’ve all come to know — Iron Man, Cap, Falcon, War Machine, Black Widow, Scarlet Witch, Ant-Man, Vision, Bucky and Hawkeye — it will also introduce a few new super folks into the mix. Their alliances, in some cases, are already clear. Some are up for grabs. Let’s take a look at the newbies, shall we?

Black Panther, or T’Challa, was the first African American superhero featured in mainstream comic books. Co-created by Stan Lee and Jack Kirby, he actually pre-dated the establishment of the American Black Panther party, and his plot-lines only began to address their concerns in later comics.

T’Challa’s inclusion in the Marvel Cinematic Universe will introduce audience members to the heroes and cultural movements of Marvel’s Wakanda, an African nation experiencing corruption. T’Challa is the rightful King of Wakanda, and was robbed of the throne by his uncle S’yan. In the comics, T’Challa falls in love with a young mutant who grows up to the Storm (of the X-Men), and their on-again, off-again relationship sees them both traveling the globe throughout comic series.

Black Panther has the standard superhero abilities: speed, strength, agility and endurance, but he also has a panther’s heightened senses, and his Panther tribe’s mystical abilities. He is a gymnast, an acrobat, and a trained martial artist. In later comics, Black Panther was given an arsenal of specialized weapons, including several high-powered blades and impervious armor. In Captain America: Civil War, T’Challa will act out many of the actions typically afforded to Spiderman in comics.

Crossbones, also known as Brock Rumlow, is a New York City gangster, a rapist, and a student of New York’s underground school for criminals, led in the comics by a super-villain named Taskmaster. Crossbones was given his code name (and villain name) by Red Skull, whom audiences met in Captain America: The First Avenger. Crossbones, when he appears in comics, is tasked with keeping an eye on Baron Zemo’s progress in obtaining the Bloodstone.

Crossbones is both a gangster and an accomplished military tactician, and he’s put in years as an assassin and commander before appearing on the Avengers’ radar. He’s also well-versed in brainwashing and psychological torture, and uses these abilities against minor heroes in comic books.

Crossbones appeared in Captain America: The Winter Soldier, but he’ll likely be targeting Bucky in Civil War. When we last saw him, he was left suffering third and fourth degree burns after the helicarrier crash, so you know he’s going to absolutely furious when he gets back on his feet.

Baron Helmut is a German engineer enraged at Captain America’s resurgence in present times. He has, according to the comics, spent a lifetime hearing stories about the American supersoldier murdering his Nazi comrades, and destroying Captain America is a personal goal.

In the comics, his mask is hideously attached to his face after he falls — what else? it’s comics, right? — into a vat of chemicals. Zemo is astoundingly intelligent, cruel and capable of horrific atrocities. He is a genius without any sense of empathy, and he hates Captain America with every fiber of his being.

Early reports of Civil War suggest that Zemo will appear in the United States in order to finish what he believes Crossbones should have: murdering both Captain America and the Winter Soldier. Though he’s technically on the same side as Crossbones, he’ll be royally pissed to discover the Nazi mission didn’t go well in The Winter Soldier.

When Marvel announced that Civil War would feature General Thaddeus “Thunderbolt” Ross, fans hoped wildly that Thunderbolt would follow his comic book plot-line, becoming Red Hulk and attempting to kick Regular Hulk’s giant ass into space. Though Marvel, deliciously, hasn’t confirmed a Red and Green smackdown, there’s really no reason to jam Thunderbolt into the already-crowded cast without giving us all the money shot.

Introducing Thunderbolt in Civil War could also just serve as foundation for future films including Red Hulk, but Nemo’s presence in the film suggests there might be some large-scale manipulations in store. Nemo’s powers include exactly the kind of thing that would bring Red Hulk to life, and since neither Crossbones nor Nemo are particularly spectacular fighters, Red Hulk could take the place as the smash-em-up big baddie that eventually unites the warring Avengers. Just a thought.

What does it mean that our new Spidey has acne, and a teenage, mid-puberty voice quality? A lot, actually! Marvel, reportedly, intends to skip over the now nauseatingly-familiar Spiderman origin story — Uncle Ben, Green Goblin, MJ and Gwen Stacy, tears, New York, blah blah — and get right into the second act meat of the Spiderverse, which has grown exponentially in contemporary comic books. In the comics, Spidey isn’t even the head honcho in New York anymore, as he’s sharing focus with a whole pantheon of Spider-powered folk. Spidey’s cute cameo in Civil War will set us up for a new and improved, web-slingin’ New York City, and that’s a good thing.

As we said before, Marvel has suggested that Spiderman’s pivotal role in Civil War comics will likely be enacted by Black Panther, which makes sense, considering the MCU Spiderman is much younger than he is, around this period in the comics.