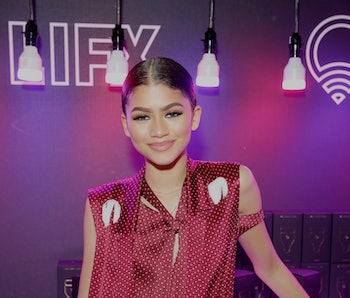 When Marvel reacquired the rights to Spider-Man in a partnership with Sony, the big question was how it might avoid a retread of the last FIVE movies. So slating the white Tom Holland as Peter Parker and not an actor of color for Miles Moralesr, felt repetitive and boring. But casting Zendaya Coleman as romantic lead “Michele” feels like the Marvel’s necessary move to distinguish their Spider-Man.

The closest “Michele” in the Spider-Man comics is Michele Gonzales, a criminal defense lawyer who dates Peter after his break-up with better-known sweetheart Mary Jane Watson.

If it is indeed Michele Gonzales whom Zendaya is playing, then Marvel tackling their Spider-Man boldly. It’s a drastic reinvention that’s pretty true to the comics (so fanboys are pleased), but isn’t retelling the same stuff moviegoers have already seen. In the the previous films from Sam Raimi and Marc Webb, Parker wooed Gwen Stacy and Mary Jane Watson.

Marvel has to be different if they want audiences to sit through a sixth Spider-Man movie. If they weren’t going to go with the obvious — making Spider-Man the black/Hispanic teenager Miles Morales — then giving him a girlfriend no one recognizes is their next best thing.

John Watts (of Cop Car fame) will direct the untitled Spider-Man, which has a release date of July 7, 2017. Tom Holland debut as Spider-Man in Marvel’s Captain America: Civil War, in theaters on May 6.