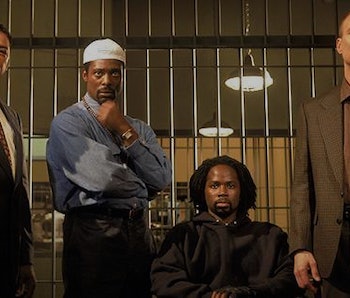 When HBO produced Oz in 1997, American audiences had never seen anything like it on television. The show was ruthlessly violent — criticizing the penal justice system, portraying both rape and homophobia, interrogating race relations and pitting Muslims against Christians. What’s more, it was heavily stylized, beginning each episode with a prelude from wheelchair-bound prisoner Augustus Hill (Harold Perrineau), who waxed poetic on larger themes affecting the prisoners in Oswald State Penitentiary. Sometimes Oz moved like a crime procedural, but often it soared like Shakespearean tragedy. Even in its final seasons, which included a bizarre musical episode, Oz shaped the ambitious television drama as we know it today.

Though programs like The Sopranos and The Wire are often credited as more influential, watching Oz is like discovering the adolescent journals of HBO’s production team. They weren’t slick yet, and their dream sequences and hallucinations didn’t have the glossy overtone that so many of Tony Soprano’s did, in later years. HBO hadn’t quite figured out how to handle a pantheon of characters linked only by motif, and Oz’s creator Tom Fontana tinkered with narrative tools that eventually inspired David Simon’s The Wire, one of the greatest television series of all time.

How to craft a villain

The show’s central storyline, which recalls the psychological torture and subsequent change of Tobias Beecher (Lee Tergesen), remains one of the most disturbing and wildly strange plot lines on TV. Few remember beloved actor J. K. Simmons as he appeared in Oz: Vernon Schillinger, a terrifying monster prone to raping or torturing other prisoners. Schillinger’s presence in Oz paved a road-map for future prestige villains, the likes of The Trinity Killer on Dexter, Orange is the New Black’s Vee, and Boardwalk Empire’s Gyp Rosetti. Though a ruthless villain was certainly not novel on television, Schillinger defined how HBO programming would later portray its villains: as emotionally complex but still inexcusable, illustrated by emotional flashbacks and periods of false redemption.

Oz’s framing of race was paramount to HBO’s budding role in television. The show had a multi-ethnic cast who spewed slurs at each other, struggling to make cross-cultural connections despite their prison’s rigidly defined power structure. Netflix’s Orange is the New Black, with its rotating alliances and group conflicts, would certainly not exist without Oz — which originated a narrative structure that allowed viewers to focus on one character, or one small group, without losing sight of the show’s overall plot. In Oz, conversations which happened in whispers, in small corners privy only to the audience, deeply affected the show’s larger drama. That dramatic irony reverberated through HBO’s programming, and it’s still present in shows like Game of Thrones.

In fact, Game of Thrones’s primary draw — who’s gonna die or be raped this week?! — can trace its legacy directly back to Oz, which enticed viewers by slaying fundamental characters in sudden, brutal scenes which seemed to erupt out of nowhere. The element of shock is difficult to nail, because most savvy viewers can identify when writers are promoting a particular character in the episodes leading up to his death. Oz, on the other hand, found a way to present narrative chaos. In many cases, the audience didn’t realize just how important any character was to Oz’s enclosed environment until he was killed off.

Finally, Oz made forward strides in the depiction of gay men on television, not by flooding each frame with positive examples, but by exploring some of the more taboo aspects of sex. Oz’s gay characters, like its straight characters, were selfish, manipulative, frightened, or unpredictable.

Sexuality didn’t redeem anyone in Oz, and in fact, displays of genuine emotion were often illustrated as too dangerous. Oz treated sexuality as an important, and imperfect part of the human experience, and not every sex scene was framed as a redemption, or a breach, or as an outright mistake for either character. Oz allowed sex to be complex, and it also framed rape as an unfortunate, but prevalent, factor in prisoners’ lives. That kind of frank honesty was shocking to viewers in the early 90s, but contemporary television, particularly on HBO, now uses sexual assault as a rating tactic. Confronting sex and other difficult themes, HBO began as a complex and nuanced voice with Oz. Both the show’s content and style still shape prestige dramas today, and HBO programming is better for it.

The entirety of Oz is available to stream at HBO Now.