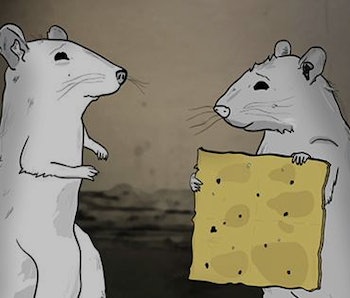 On February 5th, the first episode of [[Animals](http://www.hbo.com/animals)](http://www.hbo.com/animals) will premiere on HBO. Created by Phil Matarese and Mike Luciano and produced by Jay and Mark Duplass, Animals is an animated series of shorts about the ever-oppressed animals of New York City. We’re talking about the bedbugs we routinely exterminate, the rats that dart out from garbage bags on the sidewalk, the flocks of pigeons we try to disperse by furiously stomping. The show is the first animated comedy HBO has picked up in three years and with the prolific Duplass brothers spearheading it, HBO appears to have some specific re-branding goals.

The first two episodes of Animals premiered at last year’s Sundance Film Festival in the Special Events section. Then in May, HBO acquired the first season and ordered a second season, which marked one, if not the most significant, acquisition deal to come out of Sundance. With a large sum of money funneled into an animation series by a network that rarely picks up this type of show, HBO is clearly taking their return to animated comedy seriously.

What the two season pick-up most clearly highlights is HBO’s huge investment in the Duplass brothers, who are inescapable forces both together and apart in the TV sphere. Already, the Duplass brothers HBO series Togetherness has been renewed for a second season, which follows two couples going through midlife crises and also stars Mark as Brett Pierson. And with not one, but two, seasons of Animals already picked up, HBO is clearly digging the Duplass brothers right now. Michael Lombardo, HBO’s president of programming, upholds the genius of the Duplass brothers on behalf of the network.

“The proven talent and innate creativity of the Duplass brothers are, for us, pure gold.” Even outside of HBO, Jay Duplass stars in Amazon’s Transparent and both brothers also make appearances on The Mindy Project from time to time. Considering how prolific the Duplass brothers are at the moment, it makes sense that one of the wealthiest networks wanted to lock them down.

Based on the series HBO has acquired from the Duplass brothers, it seems the network’s intent is to give them plenty of space to showcase their range of style. On the one hand, Togetherness displays the brothers’ penchant for emotional dramas that attempt to delineate an honest, pained human experience, while Animals, based on what we can see from the trailer, upholds a whimsical, comedic approach and of course, is inherently different due to the fact that it is animated and not about human beings.

In addition to a not-so-hidden love for the Duplass brothers, the pickup of Animals also sees the network once again tapping into the well of animated comedy three years after The Life and Times of Tim ended. Widely lauded for its riveting dramas and documentaries, HBO is countering the seriousness of their other series, including Togetherness, with the lighter, animated aesthetic of Animals. Compared to The Life and Times of Tim, which is about an unfortunate guy in his mid twenties living in Manhattan who constantly finds himself in pitifully awkward situations, Animals twists the approach by removing attention from the humans inhabiting this land and zooming in on the lowly animal scum we generally ignore. Still, though, the new animated series is consistent with HBO’s stronghold on mature audiences: the aesthetic of the show is lighter, yes, but the human-like problems attributed to the grimy creatures of New York City elevate the show to a cunning level. In fact, it’s probable that some of the scenarios tackled in The Life and Times of Tim will be addressed in Animals, but this time the subjects are different.