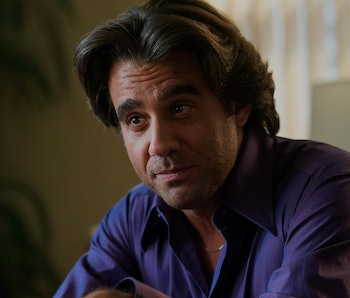 We’ve had many months of teasers for the new Martin Scorsese-produced show Vinyl; inevitably, they came a-blaring as previews prior to our favorite HBO Sunday night shows. For many viewers, the clips sent up red flags immediately; they were too obnoxious not to be polarizing. Then there was the show’s elevator pitch and roster to take into account —Boardwalk Empire-r Terence Winter and Scorsese crony Mick Jagger involved, headlines read. The whole enterprise just felt too a little to on-the-nose.

Judging by the first visual evidence, it seemed like we could certainly expect the expected: that is, dramatic Goodfellas-esque voiceovers in the mode of many of Scorsese’s “hardboiled” crime epics, and plenty of casual scenes of ravenous drug snorting and sex. Shifting from the gangster universe to the rock ‘n’ roll one would doubtless be an easy, lateral move for Scorsese and Winter.

So will this be something we could handle psychologically for the full duration of a series? Will there really be much more to it than all the hedonism, industry drama, and endless cultural references? The answer is — coming from someone who has seen the first half of the series — there is more to it. As with any Scorsese project, there is a certain, alluring depth. But the realization and general mise-en-scène is exactly as you’d imagine it. Vinyl is mondo Scorsese — either rote or classic, however you look at it. The only unfamiliar detour is the subject matter itself, rather than the style and form.

In some sense, the show is primarily about the private travails of Bobby Cannavale’s Richie Finestra, the head of fictional label American Century and a perennial coke addict haunted by various specters of his past. We see these frequently in flashbacks and hallucinations, some of which feature actors dressed up as rock and blues legend, mouthing along to iconic recordings. That part, as it may sound, is a risky business.

But Cannavale’s performance — and that of Olivia Wilde as former Warhol “it” girl, actress and Richie’s discontented wife Devon — is inspired and committed. The showrunners’ smartest move was casting leads who are definitely seasoned enough to add something to their roles, but not so high-profile that they are comfortable phoning anything in. Though Cannavale is in some sense a stock Scorsese anti-hero, the actor plays overblown lines against emphasis, exaggerating the disparity between the drunk/coked-out and sharp/sober Richies very effectively. His peaks and valleys keep this show engaging, even throughout the exhausting two-hour pilot.

But though Cannavale, Wilde, and even Ray Romano’s — as Zak Yankovich, American Century’s somewhat hapless co-founder — performances breath necessary life into the show’s bombastic scenarios, it’s still mostly the nerdy music history stuff that makes Vinyl at all interesting. The show is also a celebration of the intricacies and contradictions of 1973, one of the most exciting and formative years in the history of popular music. You might have been concerned, from the preview, that you’d need to be the type who romanticizes that time period to be a true fan of Vinyl, and that is definitely a safe assumption. Sure, theoretically there are romantic and even criminal plot lines to hold onto — families in turmoil, as well. There are characters, and you may even start to care about them. But these elements are nothing you couldn’t get from almost any other respectfully endorsed serial drama on television at the moment.

No, Vinyl is clearly mostly focused on getting this period “right.” At the time, the record industry was booming, though Finestra’s label isn’t. Musicians were in transition, searching for an antidote to the utopian hippie sounds of the ’60s by primitively experimenting with new processes (get ready to see Kool Herc planting the seeds of rap in a project basement), or just softening up and making bullshit that was easy to push to DJs. Radio was everything, as the show clarifies.

But Vinyl is so in love with the period that it stylizes elements of it hyperbolically, by way of getting inside the character’s own mythologies and self-delusions. Some of these sequences take you out of the particulars of the business the scripts outline so well, and feel vestigial. Throughout the show there’s a push and pull between effective neorealism and indulgent, sometimes inadvertently funny, cinematic wild-outs that are more than an acquired taste.

Eventually, one becomes acclimated to the style, but, by then, Vinyl has begun to function as serviceable, stock prestige TV. And if you don’t give a shit about 1970s music, you — unfortunately — won’t give much of a shit about Vinyl, even if you love Scorsese’s films by and large. You might as well just go watch another competent serial drama about a subject you do care about. Classic rock music fans, though, can expect a fun diversion for their Sunday nights.