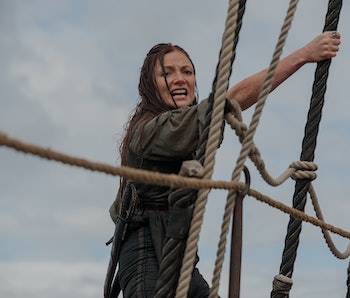 In the wake of Charles Vane’s death, the stakes for a Black Sails season finale have never been higher. At the beginning of the season, Vane said, “What we’re doing here — sitting on England’s soil with Spain’s gold — demands a response.” We’re about to see just how explosive that response will be. Flint and Silver are waging war against the might of the British Empire, there’s unrest in the streets of Nassau as Vane’s final words resonate, and Blackbeard is the biggest wildcard. Will he join Flint, or wreak havoc all on his own?

This battle has at least three sides and counting. And that’s excluding everyone caught up in the shuffle, like poor Idelle, who just wanted to help and has now been labeled a spy, or Jack Rackham, who volunteered to take Vane’s place on the front lines. He’ll need all the help he can get from Anne.

You can tell the situation is serious, because in Inverse’s exclusive photo, Anne Bonny (Clara Paget) isn’t even wearing her hat.

Will she show the British and Eleanor what happens when you’re on the wrong end of Anne Bonny’s sword — or will she and Jack find themselves out of their depth? Will Jack and Woodes Rogers have time for more book discussions? How will the Spanish, still peeved about the gold, retaliate? Will Featherstone still wear his cravat? And will someone at least bury Charles Vane, or display his necklace in a place of honor?

There are so many questions, but if this is even remotely like the Season 2 finale, the payoff will be richer than Urca gold.

The Season 3 finale airs on Saturday March 26th on Starz.