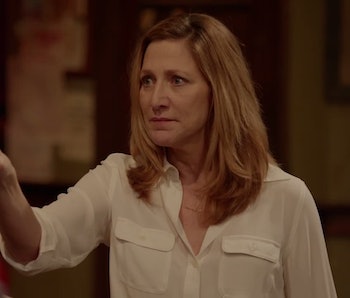 Falco’s latest gig, in Louis C.K.’s masterfully melancholic web series Horace and Pete, sees her playing another everywoman type, who plays a vital role as the only sister to Horace (Louis C.K. himself) and Pete (Steve Buscemi).

Falco often dominates the spotlight in a show that includes inveterate titans like Jessica Lange as Brenda, the tired, alcoholic ex-mistress of Horace senior, and Alan Alda as sneering, foul-mouthed bigot Uncle Pete. She’s uber present, amid an endless string of cameos from popular, up-and-coming comedians like Aidy Bryant and Michelle Wolf.

As Sylvia, Falco will make you believe that she can — and will — throw thunderbolts from her blazing blue eyes if you dare cross her. In the pilot, Uncle Pete refuses to accept Sylvia as one of the 100-year-old Irish bar’s inheritors, and insists that Horace and Pete are the real proprietors — even if they’ve proven themselves pretty inept. His stubborn reason: “That’s the way it’s always been done.” In charges Sylvia, lawyer in tow, to upend the stifling patriarchy that’s ruled their dysfunctional family for generations. In one of many stand-offs between Sylvia and Uncle Pete, it’s revealed that although all the past Horaces and Petes may have been excellent barkeepers and fathers, they were also notorious wife-beaters and philanderers.

Episode after episode, Falco’s on-fire performance left me breathless and stunned. I knew Falco could be empowered and formidable — but this is an unprecedented level of boss, and a testament to her incredibly versatile range.

Thankfully, Falco never reduces Sylvia to a harpy, but plays her as a modern woman of credible substance and dimension. Sylvia’s impulse to sell the bar is not only fueled by a desire to sweep the past and it’s unpleasant memories away, but more importantly, to pay her pricey hospital bills as a breast cancer patient. As a single mother with a limited income, she denies herself any self-pity or help from her daughter — but without coming across as entirely inflexible or inhuman. After Uncle Pete’s death, a compromise is struck between Sylvia and her brothers to enter into a three-way partnership; she proves herself a rather savvy businesswoman. Although very much on her own, Sylvia definitely doesn’t need a man to validate her existence. Even when a drunk wanders in the bar and showers Sylvia with compliments – at which she cracks a subtle, flattered smile - she’s still too busy settling the account books to be bothered.

Outside the bar, Sylvia unabashedly expresses her thoughts about women’s rights and politics. In episode six, she interrupts Horace and Pete’s stupefaction over the rise of Donald Trump: “That’s not the point, guys. It’s guys - all guys. It’s all about the boys. You know, maybe it’s time for a woman…We’ve had forty-four men in that role, and the world is going to shit.”

Later that evening, at the dinner table with Jenny (Hannah Dunne), Pete’s significantly younger date, a pointed contrast and stereotype reversal is nicely set up between the two women’s attitudes about gender. Sylvia mentions that she is a staunch Hillary Clinton fan, and then turns to Sylvia for her opinion. Although Sylvia represents a much older and conservative generation, surprisingly, it’s millennial Jenny who demurs, saying that she believes only a man is truly capable of being President. Jenny also adds that she prefers the company of older men because they have “better manners.”

In Horace and Pete, not only does Falco remind us that she is an actress of the highest caliber, but her heroic interpretation of a struggling yet admirably resilient woman of the world leads me to believe that both the bar and web series should be renamed Horace, Pete, and Sylvia.

More like this
Culture
Sep. 13, 2022
How one Ancient Greek thinker revolutionized math — and possibly started a cult
By Becca Caddy
Culture
Sep. 12, 2022
Rings of Power pulls off a brilliant trick Peter Jackson never dreamed of
By Jake Kleinman
Culture
Sep. 16, 2022
How an ultra-nationalist religious group became one of the most popular film producers in Japan
By Alicia Haddick
Related Tags
Share: