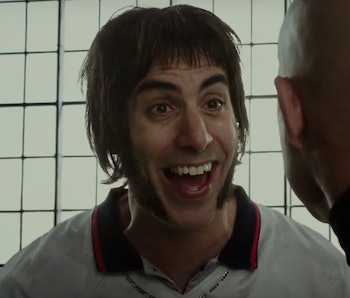 Just when you thought a running bad joke was swiftly becoming your worst reality, and that Donald Trump might actually succeed in becoming the 45th President of the United States — well, all I have to say is, thank God for New Yorkers. I have to admit, the one-hour wait in a block-long queue on Tuesday evening to attend the sneak preview of Sacha Baron Cohen’s smutty spy spoof The Brothers Grimsby turned out to be totally worth it. In Grimsby, America’s favorite bewigged xenophobe, Donald Trump, contracts AIDS.

Needless to add, Grimsby is already chock-full of typical Cohen-ish body humor of the simultaneously gross and entertaining variety. Let’s just say that there are a lot of orifice-obsessed gags; Freud would have a field day. But even after the outrageous laughs in Borat and Bruno, I never thought I would witness “brothers” Cohen and Mark Strong disappearing into an elephant’s vagina, only to be rammed by another elephant’s gigantic pink penis, whose explosive cum ends up all over Graves’ face. I mean, Graves is a classically-trained actor whose chiseled features brought the fear to RocknRolla, as well as an impressive gravitas to The Imitation Game. None of those graphic visuals compare to the unexpected highlight of Grimsby, which takes place during the climactic final scene, set at the World Cup Final in Chile.

While in pursuit of arch-villain Rhonda (played by Penelope Cruz) across the football pitch, Cohen manages to misfire his gun at celeb spectator and Harry Potter star Daniel Radcliffe (or rather, a Radcliffe look-alike), shooting Radcliffe in the shoulder. Radcliffe’s HIV-infected blood — the causes of which are revealed earlier in the film — sprays into the open mouth of Trump, who is seated behind him.

When that particular moment occurred on-screen, the entire Union Square Regal movie theater of 500 plus New Yorkers — including myself — exploded with unanimous applause and deafening hoots. I can’t speak for everyone, but it did provide me with an unexpected rush of hope and solidarity, our laughter as a sort of unofficial civil protest. Clearly, we all felt that the Republican presidential candidate frontrunner had finally received his long-overdue comeuppance.

Apparently, Londoners felt the same way, erupting in loud cheers at the film’s world premiere two weeks ago, and elsewhere in Europe, there were even reports of standing ovations. If Cohen has any qualms about Trump’s lawyers, at least he can be confident that Sony Pictures has his back. In a statement, Sony spokesperson Jean Guerin said that the idea of removing the scene was “nonsense,” and then added: “ We have been supportive of the filmmaker and the film.”

So even though I know that New York City does not speak for America’s entire demographic. Still, if the reaction to Grimsby is any symbol of our times, then hopefully, Trump’s “wall” won’t be built anytime soon.