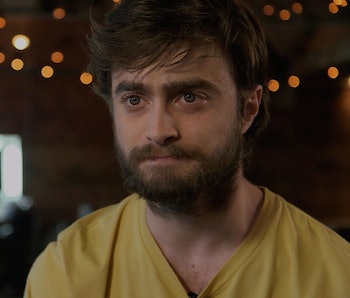 After months of trying to secure a copy, last night I finally got the opportunity to check out The Gamechangers — a film that most of you will never see, despite being released last year. Mostly, this is for the best.

BBC Two produced this 90-minute film, which focuses on the battle between the British studio Rockstar Games (which made the Grand Theft Auto series) and the American attorney Jack Thompson, who spent an outspoken career trying to ban video games for inciting violence. It’s one of the best behind-the-scenes stories in the world of games, and with Bill Paxton as Thompson (perfect casting) and Daniel Radcliffe as one of the Houser brothers behind Rockstar (fine casting), you’d think this would be a much more exciting flick. And it isn’t. And that sucks because there are an infinite number of issues about art and censorship that could be explored, and instead it feels like someone converted a Wikipedia page into exposition dialogue.

The story begins in 2002 with the release of GTA: Vice City, which was a neon pastel ’80s-themed game, but the Hauser brothers were determined to follow it up with something bigger, realer, and more undeniably artistic. To that end, they embark on a Tocquevillian journey into America so that they can craft a perfect L.A. gang warfare story. Meanwhile, a 17-year-old from Alabama who was addicted to Vice City kills some police officers. Thompson, a Florida-based attorney, sees an angle to defend the kid by placing blame on the game developers. What follows is multi-year battle between one of the biggest names in games and one of the most demonized men in this century.

Unfortunately, this winds up an unreasonably one-sided story. Radcliffe’s side of things is mostly exposition about the video game industry, ranging from increasing budgets to its desire to be taken seriously as an art form. Unfortunately, there’s a degree of this that goes so far into not trusting its audience to understand games that it suffocates the film. Does anyone really need multiple explanations of what Grand Theft Auto is and how it plays? My mother knows. You know. What are we doing here?

There’s an extended sequence where Radcliffe explains how he wants the black protagonist in their sequel game (GTA: San Andreas) to work out and become stronger. One of the other designers explains to him how that’s a common trope in the RPG field and then explains what an RPG game is. To Sam Houser of Rockstar Games. C’mon. C’mon. But the journey to America sections are fascinating, if only to see some white British video game makers understand that they know nothing about the black experience in America, and put the legwork into understanding these things before making a 25-hour interactive reflection of it. This is almost immediately undercut by one of the designers shouting, “Can we get Samuel L. Jackson for this?”

The far more interesting storyline rests on Bill Paxton’s Jack Thompson, who is a public figure who could clearly carry his own film. Thompson becomes so invested in thinking the game makers are behind violence and the corruption of youth, that he begins threatening them — both publicly and privately — laying a foundation of outrageous behavior that eventually gets him disbarred. Thompson is one of the clearest “villains” in the history of gaming, so to see him made a relatable yet flawed person is … difficult. But the film goes too far, making him into a genuine martyr. Bricks are thrown through the window of his family home and his son is bullied at school, to such a degree that it takes away from his horrible yet impressive vigilance to a cause and makes it seem like his hand was forced — which even I imagine offends Jack Thompson.

The film gets a breath of fresh air when the notorious “Hot Coffee” disaster occurs. GTA: San Andreas ships, and although the sex scene mini-game has been removed, a group of modders figure out how to access it. If you have very, very delicate sensibilities, this is what it unlocks:

Rockstar accidentally shipped a game with sex left in the code, violating a lot of real laws, and giving Thompson a line in that is far easier to prove than whether video games promote real world violence. In the end, no one gets what they want — Rockstar is forced to settle and Thompson is disbarred — so there’s no real way for the story to go out on a high note. For Houser, it’s a backstory to how he became fixated on being a cultural target of parents he thought should do a better job at parenting. For Thompson, his “passion” destroyed his legal career, although he went on to work with Hillary Clinton in the creation of new legislation for the rating and limiting of video games. If you ever wonder why some Bernie Bro types are also avid gamers, this occasionally plays in.

In the end, this takes a decent cast and enough budget to have a few fun visual effects, but the talent is completely wasted on a semi-exaggerated version of the story. This would’ve been a better fit for a documentary because it would’ve had more leeway to show how exaggerated both of these characters are. In the end, it feels like a primer for a better film. And that makes me feel violent, because that’s what pop culture does.

More like this
Gaming
Jan. 25, 2023
5 years ago, the most heartfelt indie platformer changed video games forever
By Willa Rowe
Gaming
Jan. 19, 2023
Eight major trends that will shape the games industry in 2023
By Robin Bea
Gaming
12 hours ago
The most daring Yakuza game is also the franchise’s best
By Willa Rowe
LEARN SOMETHING NEW EVERY DAY.
Related Tags
Share: