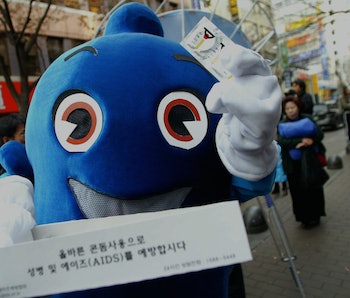 With more people every year getting access to HIV treatments, we’re on track to end the epidemic before the century hits its halfway point.

The Economist reports that since 2005, the number of AIDS-related deaths has dropped 41 percent while new infections are down 24 percent. As Bill Gates tweeted, people living with HIV/AIDS today will live an average of 20 years longer than those diagnosed in 2001. If the trends keep going, researchers say the epidemic would be over by 2030.

Preventive measures such as condoms have helped, but the real dent comes from getting treatment to the millions of infected people. Antiretroviral therapy, or ARV, will keep you alive longer while lowering the risk of passing along the infection. The death rate peaked before ARV started being pushed in the most impoverished nations.

That push has benefited from drastically cheaper treatments. UNAIDS reports that a year’s supply of first-line HIV treatment, which cost about $10,000 per person in 2000, can now be had for less than $100. No surprise people are living longer when you remove wealth as a barrier to health care.

More like this
Mind and Body
6.15.2022 7:51 PM
A single gene could stump a deadly parasitic infection
By Allison Parshall
Mind and Body
10 hours ago
What’s the best way to wash your face? Dermatologists explain the science of clean skin
By Katie MacBride
Mind and Body
6.25.2022 3:00 PM
What makes eggs organic? A USDA expert cracks open the complicated answer
By Elana Spivack
Related Tags
Share: