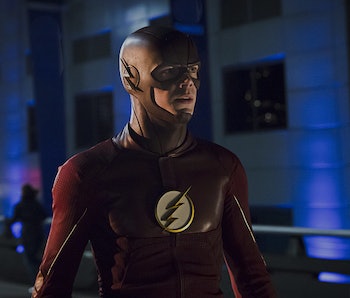 With youthful optimism and powers endowed after a freak accident, it’s astounding how fitting into DC we associate the red speed runner The Flash when he may in fact be the perfect Marvel superhero. His singular self-titled series The Flash on the CW — which nails the tone that makes Flash a great character — does a lot of what Marvel tells in its own stories. When you account for Marvel’s TV shows, which are inexplicably secret agent procedurals or prestige noir, could The Flash actually the perfect Marvel TV show?

Let’s get this shit out of the way: There is no topic in geek culture more asinine than arguing Marvel versus DC. Personal biases aside, there are too many angles to get a perfect argument: Are we talking comics? Movies? Who treats their employees better? And almost nobody considers how each publisher’s individual stories embody their time and place or advance the genre, which is what really matters. Marvel and DC are just two comic book publishers with long histories who have been at all times amazing and dumb, sometimes at once.

But there is no doubt Marvel and DC understand the American superhero differently, and their polarizing aesthetics and narrative principles have made them approach the superhero id uniquely. For DC, their superheroes have been gods who live among men. For Marvel, they’ve been outcasts.

Superheroes are so often equated as modern Greek gods; it’s a tired cliché. But that bell always rang a little more true for DC, who have actual Greek gods in their mythology than Marvel, whose heroes have been ostracized (X-Men) or brave wimps (Steve Rogers, Peter Parker) with unusual abilities. Really think about Wolverine for a sec: Claws and quick healing? He’s an oddball. And though there are exceptions — Marvel’s got gods like Thor and DC has street crusaders like Nightwing — their stories still fall in line with their company’s shared themes.

The Flash is a living god too, but he’s never acted like or seen as one. He’s almost always the snide jokester in any Justice League adaptation, thus he’s been grounded as the more human than even the actual human Batman.

In The Flash on the CW, Barry Allen is a klutzy genius who gets his powers after suffering (Peter got bite, Barry gets shocked, same diff) and now struggles to learn his place in an ever-expanding universe. His mother died as a result of his powers, his version of Uncle Ben, and now Barry runs with every breath to protect his family and friends.

Surely that is pretty much how all superheroes are born (the genre loves orphans), but our modern understanding — without grounded realism resulting from post-9/11 paranoia — is a Marvel legacy, rooted in Sam Raimi’s Spider-Man movies to G. Willow Wilson’s Ms. Marvel books. Spider-Man and Ms. Marvel are arguably the most prototypical Marvel superheroes in the Marvel U, quickly followed by the Fantastic Four and X-Men, with everyone else merely deviating from their archetypes. Tweak The Flash a little and what you have is the perfect frame for a Spider-Man or Ms. Marvel TV show.

That The Flash may be a better fit under the Marvel brand is compounded by the fact Marvel’s actual TV shows are unlike what Marvel is typically like. The House of Ideas’ broadcast stuff, Agents of S.H.I.E.L.D. and Agent Carter, have mostly been globe-trotting secret agent adventures while the Netflix shows like Daredevil and Jessica Jones take the superhero into the realm of gritty noir.

Yes, Marvel has done secret agent comics (Jim Steranko’s Nick Fury, Agent of S.H.I.E.L.D. series brought James Bond psychedelia to Marvel) as well as modern noir (Brian Michael Bendis’ Alias, the direct inspiration for Jessica Jones). And all these books and shows have been good, if not great, but these are arguably deviations from the mold Marvel set with Spider-Man, The Fantastic Four, and X-Men, and in the modern age with Ms. Marvel. And it’s apparent prototypical Marvel has been reserved for the box office, not primetime or binge TV. Do recall Alias was published under the Marvel MAX imprint, which was made to separate its adult-oriented stories away from usual Marvel.

None of this is meant to take away from either Marvel or DC. They’re both doing things right (and doing things wrong), and their contributions to the genre have only been good for the health of superhero fandom. Otherwise Comic-Con would be boring as fuck.

But the similarities and differences between comic fandom’s biggest players have created an anomaly in The Flash, a superhero with so many of one publisher’s traits and aesthetics but has been an indelible icon for the other. And this fact, hidden in plain sight, can be seen every week on The Flash, a really stellar show that any fan of Marvel or DC should be glad to enjoy.

Maybe in another universe there exists a place where The Flash kills it in the ratings for the same brand that shares its taste for red.