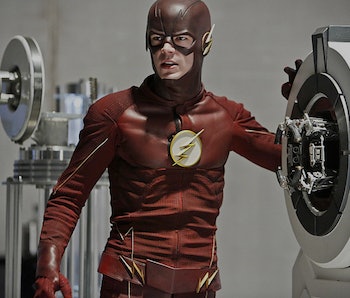 The Flash has seemingly stumbled onto the very simple secret to freshness: Don’t follow comic books past the first season. The season-long Zoom arc has been a novel experience that proves how superhero television can stay fresh as the novelty of live-action adaptations wears off.

The obsidian speed demon currently stalking Barry this season goes against convention by not being based on any specific villain from Flash’s Rogues Gallery, but rather several: The suit belongs to Black Flash, the blue lightning and speed-leeching totally come from Cobalt Blue, and the name “Zoom” was the alternate pseudonym of the third Reverse-Flash, Hunter Zolomon. Curiouser still, is the fact that the show already has its own Reverse-Flash who made his return this week in the creatively titled “The Reverse-Flash Returns” — which also introduced a version of Hunter Zolomon.

If that was difficult to follow, then The Flash has succeeded. The show is clearly fully aware of the mythology on which it is operating and of the gaggle of fans looking to assign solid identities to all silhouettes and masks that come across the screen. The multiple question marks around Zoom and his (her?!) identity have managed to get even the most devoted of comic book fans guessing again, as diving into the source material doesn’t provide answers, only clues.

Granted, The Flash isn’t unique with this tactic — it is just very successful in its execution. Last fall, AMC’s The Walking Dead set Reddit and social media ablaze when it left the character of Glenn in a situation that could end in only his untimely death. This went against the comics that gave Glenn a very explicit, very different ending. Fans were left unsure as to what might happen next, which was a new thrill. That was good, until it wasn’t. The show spent so long teasing Glenn’s fate that it eventually became apparent that Glenn would be A-OK. … So much for that.

If this tactic is new to the superhero genre, it is certainly not to television, as a whole. There’s a rich history of serial television concealing and teasing an agent of chaos’s identity. J.R.’s shooter in Dallas, the serial killer Carver in Nip/Tuck, and the entire premise of Pretty Little Liars are all great examples. This tactic being applied to a show like The Flash cements that the show — like Arrow — is moving forward with a greater focus on its own mythology rather than that of its source material.

As for Zoom’s identity, the clues are definitely there. Is he actually Hunter Zolomon? After this week’s episode, we know Hunter to be Jay’s Earth-One doppelgänger — yet another deviation from the comics. Could Zoom then be the Earth-Two doppelgänger of Henry Allen? Joe West? Perhaps, Barry Allen himself? Or, could he be from the as-yet-unexplored Earth-Three? Every answer leads to more questions, but unlike other shows (cough, The Walking Dead, cough), The Flash is making it fun for fans.