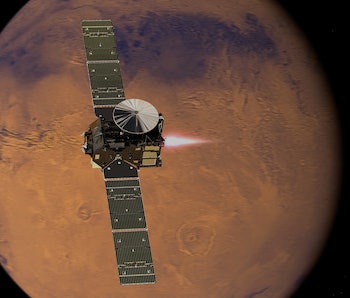 When it comes to Mars, the world’s eyes are laser focused on NASA, which wants to send astronauts to the Red Planet within the next few decades. But that doesn’t mean we should ignore what other countries are doing with Martian exploration. Look no further than March 14, when Russia and the European Space Administration launch the first part of their highly ambitious ExoMars mission. The objective is to find signs of life on Mars — past or present.

When Roscomos (Russia’s space agency) and ESA partnered up for ExoMars in 2009, the mission seemed interesting, but there wasn’t enough data to suggest we would actually find something. But since that time, research into the possibility of life on Mars has exploded — with no small thanks to the discovery of liquid water on the surface of Mars.

Now, we’re inundated with serious studies putting forth the possibility of extraterrestrial Martians. To confirm or disprove these theories, we need technology that can dig into Martian surface and look for signatures of life.

That’s where ExoMars comes in. There are many spacecraft elements being sent under the mission parameters, but the first part launching next week is comprised of two probes: Trace Gas Orbiter (TGO) that will study the surface from above, and a lander called Schiaparelli that will get its hands dirty on the ground below. ESA and Roscomos officials expect the little buggers to reach Mars by October 19.

TGO is designed to find gases in the Martian atmosphere that imply biological activity — finding trace measurements, and pinpointing potential sources for these gases. Specifically, the orbiter will try to find small concentrations of methane. Even concentrations at less than 1 percent of the atmosphere would be enough evidence to suggest the possibility of life on the surface — or at the very least, strange geological activity. TGO will also monitor seasonal atmospheric changes, help deliver Schiaparelli to the surface, and support communications for the future ExoMars 2018 rover (more on that in a minute).

Schiaparelli detaches from TGO about three days before the entire payload reaches Mars. An aerodynamic heat shield will protect the lander as it descends to the surface, with a special parachute and liquid propulsion system to help slow it down for a soft landing. The landing site will be a Martian plain called Meridiani Planum. The lander will use a very short lifespan to study the Martian environment — including surface winds, temperatures, atmosphere transparency (i.e. how much sunlight and radiation reaches the ground), and atmospheric electric fields.

TGO’s mission will last at least five years, but Schiaparelli’s science package will only be operational for two to four Martian days before its batteries die.

If all goes well, this will be a huge milestone for ESA and Russia — both of which are very familiar with Mars mission failures. The former’s only success has been the Mars Express orbiter that landed in 2003. Russia, meanwhile, has more than a dozen failed attempts to reach the Red Planet, dating back to its reign as the Soviet Union. Its most recent effort was the Phobos-Grunt mission, which ended in a disastrous launch when the probe fell back into Earth’s atmosphere and burned up.

While Schiaparelli is playing around the surface and TGO is sniffing for methane, the crew down on Earth will begin prepping for the second part of the ExoMars mission, set to launch in 2018. That includes putting a Russian surface platform on the ground for a European rover to land on — so that it can begin zipping around, drilling into the dirt for soil samples. The ExoMars rover will analyze the Red Planet’s earth for more signs of organic material and search for clues of current or ancient life forms.

The Baikonur Cosmodrome in Kazakhstan will host the launch. A Russian Proton rocket will speed out of Earth around 8:30 local time and send TGO and Schiaparelli on a path towards Mars. Just seven months later, we’ll learn more about Mars — if it’s really a desolate, sterile world, or if there’s more there than meets the eye.

More like this
Science
Jan. 29, 2023
NASA-funded study to research if bacteria could help form building materials on Mars
By Matt Williams and Universe Today
Science
Jan. 22, 2023
This nuclear-powered rocket could get humans to Mars in less than 2 months
By Universe Today and Matt Williams
Science
Jan. 26, 2023
An asteroid will come within 2,200 miles of Earth tonight — here’s why you shouldn’t worry
By Jennifer Walter
LEARN SOMETHING NEW EVERY DAY.
Related Tags
Share: