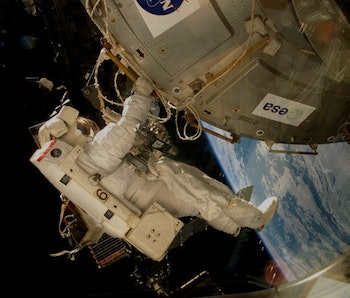 An experiment 18 months in the making has proved successful: European scientists announced today that a fungi that grows under rocks in Antarctica can survive aboard the International Space Station, under conditions similar to Mars.

The species of fungi, Cryomyces antarcticus and Cryomyces minteri, are endemic to the McMurdo Dry Valleys located in the Antarctica Victoria Land — a region that resembles the extremely dry, cold climate of the Martian surface. Both species are cyptoendothlitic, meaning they are able to colonize empty spaces and pores inside rock structures. They survive the hostile environment by literally slipping through the cracks.

Scientists with the Lichens and Fungi Experiment (LIFE), associated with the European Space Agency, collected samples of the fungi and placed them in specially-designed ISS platform called EXPOSE-E — basically a miniature habitat able to withstand extreme environments. The fungi were exposed to Mars-like conditions: atmosphere with 95 percent carbon dioxide, 1.6 percent argon, 0.15 percent oxygen, 2.7 percent nitrogen, 370 parts per million of water, 1,000 pascals of pressure, and high levels of ultraviolet radiation.

More than 60 percent of the fungal cells for both species survived after 18 months.

“The results help to assess the survival ability and long-term stability of microorganisms and bioindicators on the surface of Mars, information which becomes fundamental and relevant for future experiments centred around the search for life on the red planet,” said LIFE researcher Rosa de la Torre Noetzel in a press release.

Overall, it’s a pretty encouraging discovery. The odds of finding life on the red planet are pretty slim as it is, but the confirmation of liquid water on the surface of Mars certainly raised hopes. No scientist in their right mind is expecting to find anything beyond primitive life forms, but it’s quite possible we’d find bacteria or fungi that have evolved the ability to survive and reproduce under below-freezing temperatures, deeper within the Martian rock.

Furthermore, knowing that some organisms could withstand Martian conditions also raises hopes that we could perhaps terraform a future Mars and turn the planet into Earth 2.0.

We’ll have to wait and see what future ground missions (like the Mars 2020) find out.