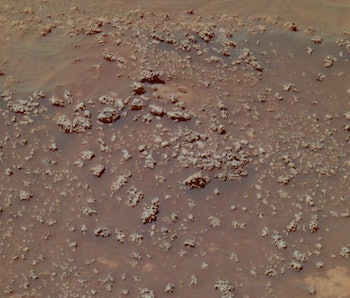 A pair of astronomers from Arizona State University think they may have found evidence that there is or, at one point, was life on Mars. And it comes in the form of a bunch of curious structures with tops shaped like heads of cauliflower.

Yeah, it’s all pretty weird. But this is actually the best support so far for the possibility that alien life on Mars is real. Or, at least was real.

The chances of finding life on Mars is low, so any time someone claims to have found evidence, you want to initially be very skeptical. Humans have sent four rovers to the surface over the last two decades, and in all that time we’ve only found a barren wasteland unsuitable for most kinds of organisms.

But the keyword there is most. There is life here on Earth that currently lives in climates similar to that found on Mars. Last week, in fact, scientists proved that certain fungi endemic to the south pole can survive in a Martian climate. So life on Mars isn’t impossible — just improbable.

The new study, presented at the December meeting of the American Geophysical Union and first reported on by Smithsonian.com, focused on a series of mineral deposits discovered by NASA’s Spirit rover. Those deposits were made of opaline silica, and possessed a very strange feature: outer layers with protrusions and shapes similar to those of silica formations found here on Earth in the Chilean desert.

On this planet, those cauliflower-shaped structures are sculpted by microbes. They don’t form naturally. And yet they look remarkably similar to the Martian structures. According to the ASU astronomers — who declined to talk to Inverse for this story because they are completing the final draft of the study — it stands to reason that an explanation involving Martian bacteria is worth taking seriously.

The pair came to this theory after comparing the Spirit images to silica structures in Chile’s Atacama Desert — the driest place on Earth that isn’t located at one of the poles. The climate is very much like the cold, dry landscape of Mars that’s pummeled by ultraviolet radiation thanks to an extremely thin atmosphere.

Silica structures with cauliflower-like shapes are also found in Yellowstone National Park and Taupo Volcanic Zone in New Zealand. It’s been proven that the structures there were shaped by microbes — and with that in mind, it’s likely that microbes shaped the Chilean silica structures as well.

The catch: We don’t know yet whether the Chilean structures were shaped by microbes. That’s what the ASU astronomers want to find out. And that’s also why they’re stopping short of making any big conclusions.

One of the big things to bear in mind is that the microbes in Yellowstone and Taupo have evolved in warm, moist, oxygen-rich environments. If there are microbes sitting on top of the silica deposits in the Atacama Desert, they probably look way different. And that goes 100x for any sort of Mars aliens.

And of course, abiotic geochemical reactions could be to blame. Silica can certainly be shaped by non-biological processes into complex structures — no life required.

The ASU team will follow up with direct analysis of samples from the Chilean silica structures soon. Of course, the best way to prove or disprove this theory will be to study direct samples of Martian silica structure. That won’t be happening till sometime after 2020 — and probably way later than that.