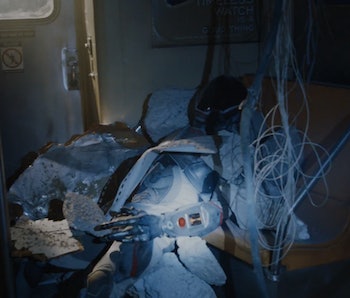 Finally, we got the first of the crucial eruptions we were looking for in USA’s Colony — the schism between Katie and Will opens, and we realize that all their hopes and dreams of finding a better life are beside the point. Their paths have diverged too far for them to come back together.

And the situation can only get worse. Katie’s particular rage is more pointed and urgent now, after finding the comic Lindsay the tutor gave Grace (Katie’s daughter). “Don’t ever believe anyone who tells you that what we’re dealing with here is benign,” she says furiously to Bram, who seems at least tacitly aware of the work she is doing with the resistance. There is something, definitively, for her to be fighting for; it’s a shame it got in the way of us checking out Bram’s telescope again.

In her final confrontation with Will, one doesn’t really know who to side with: Both are desensitized to death, and have long accepted the need to kill people. Will, who makes an analogy to the Taliban earlier in the episode, is concealing his attempts at the rather sisyphean task of fighting the alien forces, seems less convincing. At the heart of his position, really, is a fear of mortality that has dissipated for Katie, with the comic book, her newfound equal footing with Broussard, and the lead about the Very Important Person being smuggled into the bloc.

Did you find him hard to make out when he flashed by in the first moments of the episode? He looked something like a Power Ranger, in a helmet with a larger black visor. The definitively alien detail, however: a long, four-fingered gloved hand. Unclear how big this thing is to scale, but we can look forward to a detailed investigation next week. See for yourself below:

As you may have deduced — but the preview for next week’s season finale also makes it clear — Broussard, Katie and guest star Thora Birch’s gang maneuver is going to set off mass chaos. It’s a serious political crime. One can only hope we don’t get out of this episode without seeing our confused and consternated heroes confronted with a real-life alien mug for the first time. We’re really starting to get Childhood’s End-y now. I’m not sure if this is a good show, or if it is just very effective at setting things up so the viewer can never turn away. As we know, co-creator Carlton Cuse helped birth Lost, so I’m fully expecting some degree of disappointment next week.