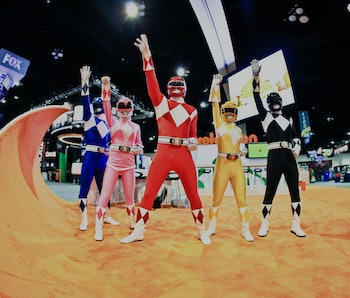 Power Rangers occupies a curious place in pop culture. People want to see a big-budget movie, evidenced by the reaction of Joseph Kahn’s POWER/RANGERS, but no one can imagine an authentic tone. It’s either that the Rangers should get dark and gritty or remain a candy-colored fantasy for kids whose parents haven’t divorced yet.

But a feature film is set for release on Jan. 13, 2017, and the creative team assembled may have cracked the code. Collider has acquired an exclusive look at the character bios, and they sound legitimately great.

Unless you actually remember the Mighty Morphin’ Power Rangers, then this should be worrisome. This movie does not have to be a slave to the original show, but things that mattered are not mentioned here. Is Jason a karate expert? Is Zack a dancer? Is Kim a gymnast? Their signature hobbies were a cheap way to characterize them in 1993, but they evolved to become their kind of inner super power — their natural talent they used to win the day (which is a great story to tell anyone, kids and adults alike). Iron Man’s super suit isn’t really his super power; it’s his brain and wit.

The descriptions are below, followed by some quick analysis on what they got right and wrong.

Jason — 17 years old, the makings of someone or something great if he would just get out of his own way. Jason was a legend of this town — a freshman quarterback with the skills to take him all the way. People knew his name. Children wore his jersey. Until, one night Jason wrapped his car around a pole and busted out his knee. Everything Jason was going to become ended in an instant. And with it, he lost himself. When we meet him at the start of the film, he’s a kid in need of redemption. By the end, he’ll be leading this disparate group of teens to shed their individual baggage and find who they truly are.

So does Jason know karate? This wouldn’t be a big deal if half the success of Power Rangers wasn’t from martial arts. The show made kids get off their butts and sign up at their nearest dojo. Marvel and DC never made kids do that.

2017 Jason is sounding straight outta Friday Night Lights — definitely a significant departure from 1993 Jason. At a convention in 2007, actor Austin St. John said he tried to make Jason a younger Bruce Lee while the producers wanted the all-American bro. If Jason is to lead a team of space ninjas, being a karate teacher — which was the very first thing we ever saw of Jason in the show — makes a lot more sense than a football player feeling bummy.

Kimberly — 17 years old, unconventionally cool all in a way the popular girls wish they were. In fact, she was one of those girls, but isn’t anymore. Not since she’s returned to school after an absence of 6 months. Rumors are flying as to why; rumors she seems not to care about, because she’s come back with this new rebel-without-a-cause, edgy attitude. But the truth is, it’s all masking a deep secret that makes her feel profoundly vulnerable.

Trini — 17 years old, mysterious and extremely bright. Her parents constantly move for work, making Trini the perpetual new girl to any school. A loner who owns it, Trini is self-sufficient, contemplative, but always observant. All she wants is to find her gang of friends, but she’ll never admit it — least of all to herself.

Kimberly and Trini sound awesome, but I’m still fond of ‘93 Kim. She’s a lot more complex than the dumb Valley Girl she’s remembered for. Throughout her time as a Ranger, she ended up surviving by the skin of her teeth more than the others did.

Billy — 17 years old, slight and awkward. Billy is challenged in his abilities to communicate and interact socially. Whip-smart and sweet, but always odd. Sometimes in a fun way, sometimes not, Billy is a kid with no filter. Showing his emotions, understanding sarcasm, and dealing with his OCD is a constant challenge. Has never really had any friends and instantly gravitates towards Jason.

Billy is “whip-smart” but he doesn’t sound like a boy genius. Is he the same nerd who made devices to help the Rangers get out of jams like Q in blue spandex, or is he more like Zuckerberg a la The Social Network, complete with the filter-less quips and one-liners?

I kind of like it. It feels refreshing in the right way. Miles Teller’s Reed Richards in Fantastic Four would have been how I made Billy if I were involved, but that movie tanked hard so that’s a bullet we dodged.

Zack — 17 years old, always the life of the party. Filled with bravado and swagger, Zack’s tough and cool on the exterior. A charming guy who’s never had trouble with the one-liner, nor lacked confidence around women. A great athlete that’s never wanted to play on any team but his own. Zack advertises everything about himself, except the truth, which is that he lives in a trailer park with his single mom, and because of it, feels deeply inferior to all his peers.

Zack is basically Zack. This description doesn’t mention if he’s a dancer, but the personality type is pretty much there.

I’m totally fine with there being no mention of Tommy or Bulk and Skull, the Rosencrantz and Guildenstern of Power Rangers. Tommy shouldn’t be introduced until the sequel, and I hope Bulk and Skull don’t show up at all. The magic of those two came from actors Paul Schrier and Jason Narvy, actual Shakesperean-trained performers who put more effort into those roles than anyone asked of them.

Overall, these Power Rangers characters sound exactly like the sort of scuffed-up teenagers who can make a superhero movie compelling. They’re imperfect! They have doubts and insecurities! And most of all, they sound like teenagers and gets bonus points for not including the sentence “Zack is also a Vine star.” Because who even knows if that’ll be a thing when the movie lands in 18 months.

More like this
Entertainment
Jan. 26, 2023
Teen Wolf: The Movie is fan service done right
By Mónica Marie Zorrilla
Entertainment
Jan. 30, 2023
New House of the Dragon “making-of” book plunges into the fantasy hit’s creation
By Jeff Spry
Entertainment
Jan. 23, 2023
Dungeons & Dragons trailer is the closest we'll get to playing the real game (with hot celebrities)
By Dais Johnston
LEARN SOMETHING NEW EVERY DAY.
Share: